The UK general election receives the full interactive treatment, with both the BBC and Sky providing enhanced coverage, but it seems that this is one programme in which viewers will not have a vote.

Viewers could vote for the red or the blue team in Hell’s Kitchen on ITV, but they are not able to cast an electoral vote with their remote – at least not yet. In fact, there will be no interactive coverage of the election on the main commercial network in the UK. BBC and Sky viewers, however, could press red to watch extended coverage of the election results.

Election night always provides broadcasters with an opportunity to show off their latest technology, and this year is no exception. As the results of the general election come in, the ability of interactive television to present multiple viewpoints really comes into its own. 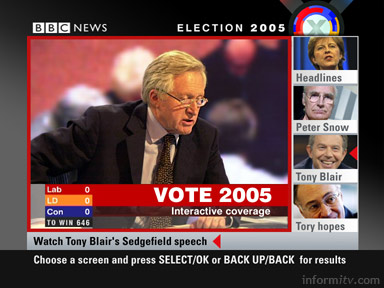 For its flagship election coverage, the BBC provides four additional streams overnight, consisting of an updated news loop, graphics package, highlights from counts across the country, and an update from around the nations. Digital terrestrial viewers only have access to three streams as a result of restricted capacity on Freeview. In addition to the multi-screen coverage, there is a full results service updated as votes are declared. 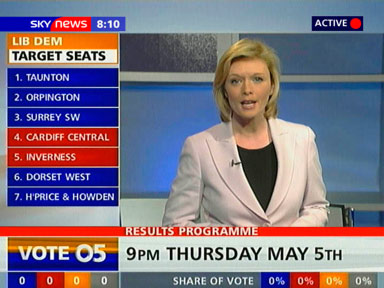 Sky offers no less than sixteen different screens, with eight Sky News Active screens, one of which leads to an extra mosaic with a further eight screens providing access to local constituency counts. 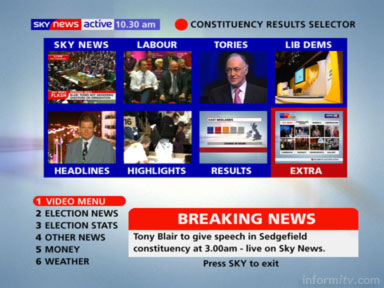 Each stream can be selected as a full screen image. The gallery screen, a standard feature of Sky News Active, shows a view of production gallery, while viewers can call their own shots and select from the available feeds. 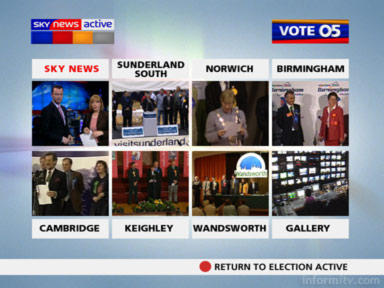