UK dance band The Chemical Brothers will be using interactive TV to provide an exclusive preview of their aptly titled next album ‘Push the Button’.

The deal with EMI marks the first time that a music advertiser has used interactive TV to preview an album launch.

By pushing the interactive button on their remote control and choosing Sky Active, digital satellite viewers in the UK will be able to watch interviews with the band, together with editorial features and live footage. 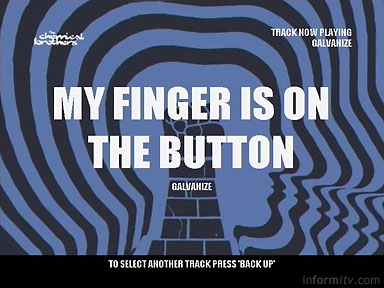 In advance of the official UK release, five full tracks from the new album, will be available on a dedicated interactive jukebox, including the current single ‘Galvanize’, which includes the line “the time has come to push the button”. The tracks are accompanied by a series of captions illustrating the lyrics.

The presence on the Sky Active portal will be backed by an interactive advertising campaign on Sky One, Sky Sports, Channel 4 and E4.

Digital satellite viewers will be able to push the red button during the commercial to go straight to the interactive jukebox.

The interactive audio application was designed by creative agency Weapon7 and was built by Sky Interactive.

Digital TV is the ideal medium for viewers to get involved with entertainment brands explained Steven Hess, managing partner of Weapon7. “The Chemical Brothers, as one of the most innovative brands, can see the possibilities that the medium offers for reaching their audiences in new and exciting ways.” He points out that the immediacy of interactive TV particularly suits entertainment brands. “With this approach a band can put their music directly into a viewer’s living room.”

The visual design and direction of the campaign is apparently inspired by French sixties political propaganda, reflecting the anti-establishment attitude of the album, according to Weapon7’s creative partner Simon Smith.

By extending the campaign to the Sky Active portal as well as ‘red button’ advertising, BSkyB aims to explore further the potential for advertisers to use entertaining interactive content to engage consumers in their brand or product.

Ian Shepherd, managing director of Sky Interactive, observes that interactive television has long been an untapped opportunity for the music industry. “The combination of rich editorial content and a secure distribution platform can give music labels the ability to engage consumers in a truly entertaining experience.”

He added that the recent re-design of the Sky Active entertainment portal in a magazine-style format has created opportunities for advertisers to get more closely involved in editorial content, commenting “We expect that one of this year’s defining trends in interactive advertising will be a move for more brands to take advantage of interactive sponsorships and content creation.”