Netflix ended 2016 with 89.09 million paying subscribers. If it maintains its recent rate of growth it could pass the 100 million mark sometime after the middle of 2017, with around half of its subscribers outside the United States. 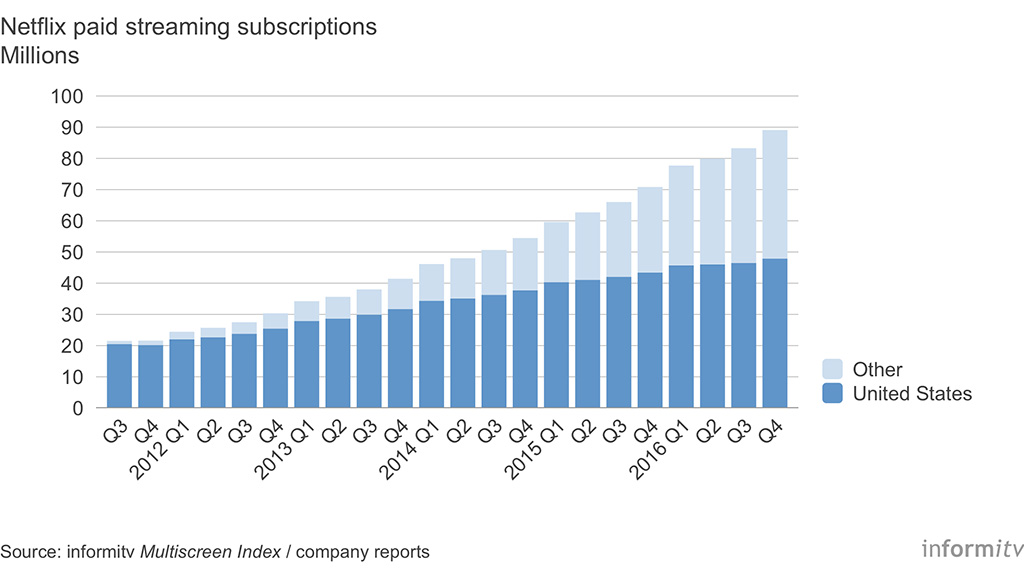 From January 2016, Netflix was available virtually worldwide. During the year it added 13.75 million paid subscribers outside the United States, compared to additions of 10.66 million the preceding year and 7.06 million the year before that.

So Netflix has been growing its international base substantially. Over 75% of its net additional subscribers were outside the United States in 2016, compared to 65% in 2015 and 54% in 2014.

Netflix management is forecasting that the company will end the first quarter of 2017 with 49.86 million paid subscribers in the United States and a total of 95.34 million worldwide.

If Netflix maintains its recent rate of growth, it could pass 100 million paying subscribers worldwide in the third quarter of 2017. Around half of its paid subscribers will then be outside the United States.

Netflix plans to spend over $6 billion on programming rights and production, up from $5 billion in 2016.

Anticipating a weakening of network neutrality regulation in the United States, Netflix said this is unlikely to affect domestic margins or service quality because its popularity with consumers would keep its relationships with internet service providers stable.

In terms of competition, Netflix noted that Amazon Prime Video is now also available globally. It also observed that YouTube remains far larger than either Netflix or Amazon in terms of time viewed globally. Satellite service providers are offering their own online television services, while Hulu is expanding into live video, the company observed. “In short, it’s becoming an internet TV world, which presents both challenges and opportunities for Netflix as we strive to earn screen time.”