Politics were very much on the agenda at the fortieth Edinburgh International Television Festival, with a focus on the funding of the BBC and renewal of its Royal Charter. Although the annual convention was marked by the attendance of the Media Secretary and the First Minister for Scotland, the star turn was the creator of Veep and The Thick of It, Armando Iannucci. He called for a more positive view of the export potential for British television, as Brent MacGregor reports from Edinburgh.

The last time a Secretary of State for Culture Media and Sport spoke at the Festival there was palpable tension in the hall. Jeremy Hunt was firm but oddly disinterested and he was not well received.

John Whittingdale, the new incumbent, was interviewed by Alastair Stewart of ITN. Drawing on his experience as chair of House of Commons Culture, Media and Sport Select Committee, the Secretary of State reminded us of how much had changed in the last 10 years and how much would change in the next decade.

He made it clear there was no conspiracy at work. No secret conversations had been had with Rupert Murdoch and there was no unfinished business left from his days in Margaret Thatcher’s private office. Perhaps the BBC and its supporters were tilting at windmills?

Only on the issue of funding were there some surprisingly clear statements. Delegates were told that advertising was not the answer nor was funding from general taxation as in Holland. Subscription was not the magic solution either: “the difficulty with subscription is that you can’t, even if you wanted to, do it at the moment”.

When asked who should oversee the Corporation, the BBC Trust or Ofcom, the Secretary of State replied tellingly that Ofcom was “doing a good job”. His view was that the BBC was not partisan but neither was it immune from criticism. If politicians had to admit to the ring of truth portrayed by the political satire In the Thick of It, he suggested that broadcasters had to acknowledge the same for the BBC mockumentary W1A. The reasonable tone of Whittingdale’s remarks meant that there was none of the frostiness of Jeremy Hunt’s visit, nor the outright hostility that James Murdoch encountered six years ago.

The political theme of the Festival continued with a Leader’s Debate bringing together, apparently for the first time, key figures from the BBC, ITV, Sky and Channels 4 and 5. For the BBC, Danny Cohen was happy to ‘bank’ Whittingdale’s comments, while Channel 5’s Ben Frow likened the BBC to the NHS as a treasured national institution but one that will have to change. Much was made of the BBC’s positive role in developing talent and taking chances, observations coming from commercial executives themselves former corporation staff. Peter Fincham also stressed how large and domineering the BBC could appear when seen from the commercial sector.

As ever, the centrepiece of the Festival was the annual MacTaggart Lecture, entertainingly given this year by Armando Iannucci, who championed television creatives over the all too many managers.

Instead of having faceless broadcast executives negotiating compromise, he suggested a more bullish approach.

“Let’s be more assertive; the international market flatters us with imitation: now’s the time to strike out not huddle down. If the licence fee is under strain, then let’s supplement it not carve it up, by pushing ourselves more commercially abroad. Use the BBC’s name, one of the most recognized brands in the world, and use the reputation of British television across all networks, to capitalise financially overseas, be more aggressive in selling our shows, through advertising, through proper international subscription channels, freeing up BBC Worldwide to be fully commercial, whatever it takes.”

Iannucci would have the managers and the ministers leave the creatives alone to make the product and instead concentrate on championing the cause internationally:

“If public service broadcasting, one of the best things we’ve ever done creatively as a country, if it was a car industry, our ministers would be out championing it overseas, trying to win contracts, boasting of the British jobs that would bring. And if the BBC were a weapons system, half the Cabinet would be on a plane to Saudi Arabia to tell them how brilliant it was,” he said. “And yet, it’s quite the reverse. They talk of cutting down to size, of reining in imperialist ambitions, of hiving off, of limiting the scope, with all the manic glee of a doctor ever so reasonably urging his patient to consider the benefits of assisted suicide.” 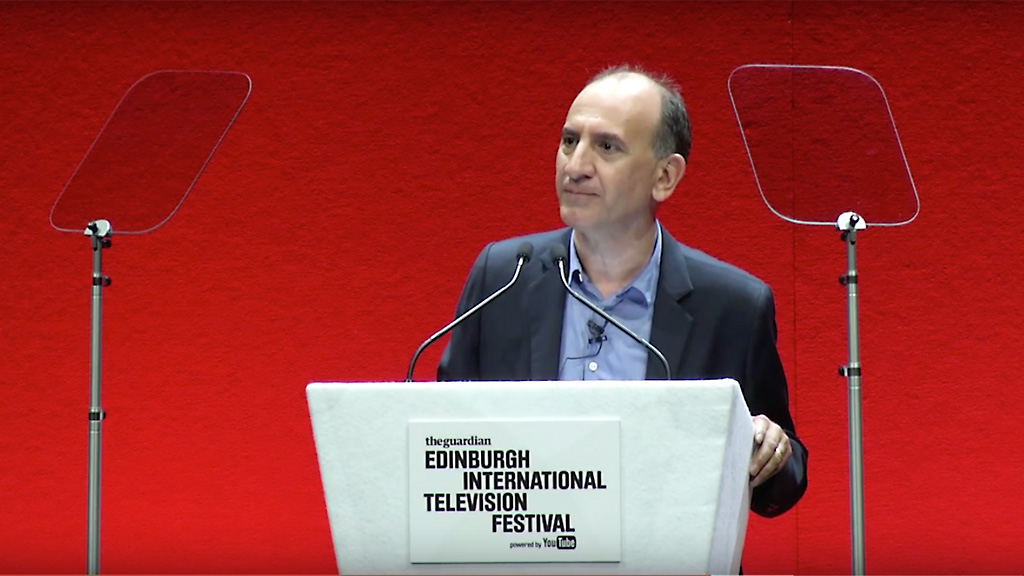 When asked about the speech Whittingdale said he thought it “funny” and later invited Iannucci for a talk. Even the post McTaggart dinner, once the scene of a loud slanging match between Robert Peston and James Murdoch, was subdued with Bakeoff presenter Sue Perkins only politely reproaching the Secretary of State. He no doubt invited her for a cup of tea, as long as she brings a cake.

The BBC Under Siege panel session the next morning included the corporation’s director of strategy James Purnell, a former secretary of state, who said it was time to “move the debate on” after Whittingdale’s comments, which had “changed the mood.” Presenter Nick Ross was less optimistic, blaming the BBC for “strangling itself” every ten years when it has to go cap in hand to the government. “Stop clinging to the tit” he implored. “Why couldn’t the BBC liberate itself and break the cycle of dependency?”

Subscription was discussed but dismissed rather easily on the grounds that it is very expensive to collect. These figures came courtesy of Sky who may have an interest in not having competition fishing in the same subscription pond. In fact, there was a sense that ITV and Sky were quite happy not to have competitors dipping in to their respective revenue pools. On this evidence, the solution seemed to be a Licence Fee set like water and electricity prices, not by the Government of the day, but by the new regulator Ofcom.

A lot of talk, less confrontation than some feared and some others hoped for, but no really big or radical ideas emerged.

Of course John Whittingdale’s moderation may well be overruled by George Osborne — a warning given by Shadow Culture Secretary Chris Bryant.

Nicola Sturgeon, the First Minister for Scotland, addressed issues from a very different point of view in the Alternative McTaggart session.

She called for the Charter renewal process to be more transparent, leading to a strong and independent BBC serving a mass audience and funded by a universal system, possibly income based. The BBC should better serve the nations and regions. Specifically for Scotland, she urged the creation of a second English language radio station and a distinct television channel.

Can meaningful conclusions be drawn from the festival debates? There was certainly much food for thought and some amusement but no firm conclusions about the future. Whether producers, writers and directors or the dreaded managers and politicians, it seems there is an opportunity for creative solutions, which is not yet being taken.

The BBC, as Armando Iannucci passionately argued, “is a mirror into which Britain gazes every day”. He said: “Tampering with it is madness. The question shouldn’t be, how do we cut it down to size, but why should we?”

Interestingly the text of his speech used the word “dismantling”. This was modified to “tampering” by the time of delivery. Clearly diplomacy was in the air.

The James MacTaggart Lecture delivered by Armando Iannucci is available to view on YouTube.