A report from Accenture claims that the undisputed popularity of television is ending, as viewers shift their allegiance to other devices. The headline is that our love affair with the television may be coming to an end, but the survey on which this is based raises many questions.

The Accenture Digital Video and the Connected Consumer report is based on research conducted online in October and November 2014 with 24,000 people in 24 countries. The sample in each country was supposedly representative of the online population aged over 14. The survey polled respondents about their usage, attitudes and expectations relating to digital media.

Three observations may be made about possible limitations of this methodology.

Secondly, 24,000 sounds like a reasonable number of respondents but it is only 1,000 people per country, with 200 per age group. Media companies that routinely measure their users in millions may be sceptical about the power of relatively small samples, especially if they are not randomly selected.

Thirdly, self-reported behaviour is rarely reliable. Responses tend to over-represent the impression that respondents wish to promote, consciously or otherwise. They may tend to over-report behaviour that seems appropriate while under-reporting that which may be considered less desirable or remarkable.

That said, the annual Accenture Digital Consumer Survey provides a measure of some apparent trends. 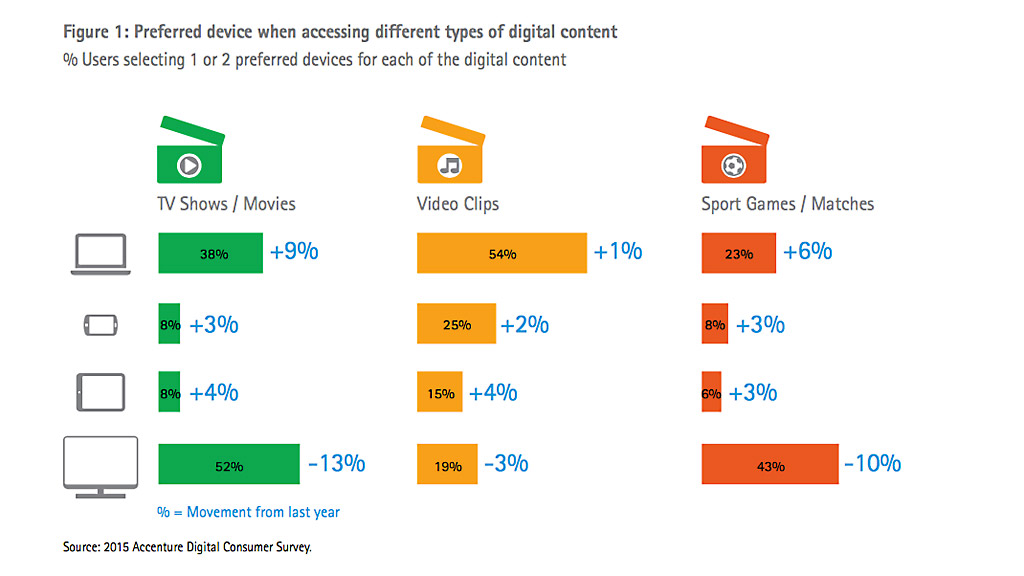 This is certainly surprising, since other measures of usage generally still show far more viewing on a television than on any other type of screen.

This seems remarkable, particularly among the older demographic, which tends to watch the most television.

According to Accenture “It’s a dramatic trend. Globally, the TV has lost 13 percent of its audience for this type of content in the past year”. Apparently, “Ten percent fewer people around the world watched sports on a TV screen last year”.

That would be extraordinary if it were true, but it does not actually follow from the survey responses.

The question asked was what is the preferred device when accessing television shows or movies? Only 52% said the television, down 13% on the previous year. That does not equate to a 13% reduction in people watching television or of television viewing.

Having attracted our attention, the report says that reports of the demise of television are premature and points out that television is still by a long way the favourite entertainment pastime in America.

However you choose to measure it, people are still watching television screens and television programmes, in very large numbers for a lot of their available time. They may be watching them in different ways, but that has been happening for decades.

The main message of the report is that incumbent operators have an opportunity to dominate the new video content marketplace — provided they play to their strengths.

Digital Video and the Connected Consumer is available for download from the Accenture web site.