President Obama has asked the Federal Communications Commission in America to make specific provisions to ensure net neutrality. Despite overwhelming public support for the principle of an open internet and apparent agreement on its merits, leading service providers remain strongly opposed to broadband access being classified as a telecommunications service rather than an information service.

“An open Internet is essential to the American economy, and increasingly to our very way of life,” the President said in a statement. “By lowering the cost of launching a new idea, igniting new political movements, and bringing communities closer together, it has been one of the most significant democratizing influences the world has ever known.”

He called on the Federal Communications Commission to protect the ‘net neutrality’ principle that service providers should treat all data on the internet equally and without discrimination.

“I believe the FCC should create a new set of rules protecting net neutrality and ensuring that neither the cable company nor the phone company will be able to act as a gatekeeper, restricting what you can do or see online.”

No blocking – service providers should not be permitted to block requests to local web sites or internet services.

No throttling — service providers should not be able to slow down traffic intentionally to favour other services.

Increased transparency — to apply not only to connections between service providers and consumers but also to interconnections with the rest of the internet.

No paid prioritization — no service should be stuck in a ‘slow lane’ because it does not pay a fee.

He also suggested that these rules should be applied to mobile as well as fixed networks. 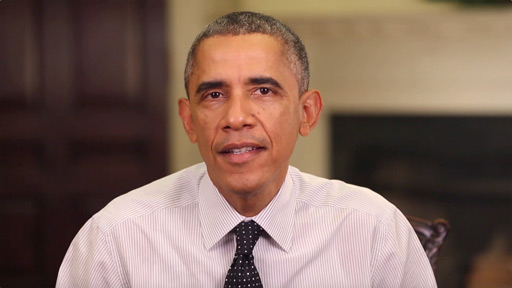 For almost a century the law has recognized that companies have special obligations not to exploit their monopoly over telephone connections.

“It is common sense that the same philosophy should guide any service that is based on the transmission of information — whether a phone call, or a packet of data,” he said.

He has called on the FCC to reclassify consumer broadband service under Title II of the Telecommunications Act, essentially recognising internet service providers as common carriers, like telephone services.

Although the FCC is an independent agency, the President addressed his statement directly to its Commissioners.

“The Internet has been one of the greatest gifts our economy — and our society — has ever known,” he concluded. “I respectfully ask them to adopt the policies I have outlined here, to preserve this technology’s promise for today, and future generations to come.”

Tom Wheeler, the chairman of the FCC responded quickly. He said in a statement: “Like the President, I believe that the Internet must remain an open platform for free expression, innovation, and economic growth. We both oppose internet fast lanes. The internet must not advantage some to the detriment of others. We cannot allow broadband networks to cut special deals to prioritise internet traffic and harm consumers, competition and innovation.”

In January 2014 a federal court struck down rules that prevented internet service providers from blocking and discriminating against online content.

The FCC has since been seeking a legally practical solution. This included considering using provisions in Section 706 of the Telecommunications Act, which some suggest does not go far enough. The commission subsequently floated the idea of a hybrid use of Title II and Section 706 provisions.

Even with the intervention of the President, it seems the FCC is far from reaching a solution.

“The more deeply we examined the issues around the various legal options, the more it has become plain that there is more work to do,” the FCC chairman noted. “Ten years have passed since the Commission started down the road towards enforceable open internet rules. We must take the time to get the job done correctly, once and for all, in order to successfully protect consumers and innovators online.”

Comcast claims that it supports net neutrality. The largest broadband service provider in the country aims to become even larger through its pending merger with Time Warner Cable, for which it requires regulatory approval.

In a statement, David Cohen of Comcast said: “What is remarkable is that if you compare the President’s articulation of his vision for net neutrality as set forth in the White House talking points released yesterday afternoon, we are on the record as agreeing with every point.”

Comcast points out that it invested $6.6 billion in infrastructure in 2013 as a result of ‘light touch regulation’. Comcast is strongly opposed to the reclassification of broadband as a telecommunications service under Title II, which it claims would limit investment.

AT&T, which is hoping to acquire DIRECTV, subject to regulatory approval, is also opposed to anything other than light touch regulation.

“We feel the actions called for by the White House are inconsistent with decades of legal precedent as well as Congressional intent,” Jim Cicconi of AT&T said in a statement. “Moreover, if the government were going to make such a momentous decision as regulating the entire internet like a public utility, that decision is more properly made by the Congress and not by unelected regulators without any public record to support the change in regulation.”

He said that if the FCC were to put such rules in place AT&T would expect to challenge them in the courts.