While nearly all households in Europe can access basic broadband services, significant challenges still remain in delivering higher speed broadband to all. The aim is to offer speeds of at least 30 megabits per second for all by 2020. The European Union is more than half way to that target, with next generation access available to 113 million EU households, around 54%, at the end of 2012, up from 48% at the end of 2011. There is still a long way to go.

The data comes from a study on broadband coverage commissioned from Point Topic by the European Commission and only recently published. It shows that while progress has been made there is still much to be done.

The report identifies 31 million rural households in the 27 countries of the European Union. Bringing next generation access to these 15% of households remains a challenge.

Satellite provides near universal coverage to all but some countries in the north but has limited capacity. Telephone line coverage extends to nearly 93% of households but only 76% in rural regions. High-speed cable reaches nearly 40% of homes but under 6% of rural households. There is 27% coverage with LTE or 4G mobile broadband but only 10% of rural regions. 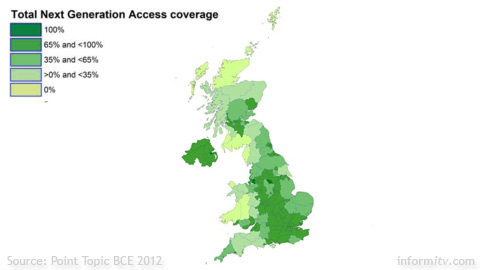 Point Topic has mapped every square kilometre across Europe for broadband access and provides summary data on its web site and more detailed statistics for subscribers to its database.

The company provides its data to a popular property web site in the United Kingdom to allow people to understand their broadband connectivity options when considering their next home.

Figures from the communications regulator Ofcom estimate that 73% of premises in the United Kingdom were in a postcode that was served by an NGA network in mid-2013, although not all of them would be able to receive ‘superfast’ services of 30 megabits per second or more.

It should be noted that these figures refer to availability rather than adoption.

In early 2013 only 3.8 million homes in the United Kingdom actually had a superfast broadband connection, which is 17.5% of broadband subscriptions, or 13.6% of households in the country.

A quarter of homes in the United Kingdom still do not have a broadband connection of any type. Four out of ten of them do not think they need one.

So as well as the physical challenge of connecting homes to high-speed networks, there is a question of perception. Many people do not apparently think they need faster broadband, at least until they try it. If they live in a rural area they may not have the opportunity.

Study on broadband coverage 2012 is published by the European Commission and is available from its web site.