BBC Worldwide is to wind down its global iPlayer app and focus instead on the BBC.com web site and an international version of the proposed online BBC Store. The news comes shortly after the BBC announced its strategy to put the iPlayer at the centre of its vision and appoint a new controller to manage the service for users in the United Kingdom.

Tim Davie, the new chief executive of BBC Worldwide, who replaced Jana Bennett who previously took up the post to champion the global iPlayer, announced his vision for the commercial arm of the BBC. This will focus on investment in programming, branded channels and the BBC.com web site.

Over the next three years the international web site aims to double its reach from 250 million visitors a week to 500 million. The BBC.com site will include a long-form video player and an international version of an online BBC Store. There is already an online BBCShop.com

The global iPlayer app, currently deployed in 16 countries and available only on Apple devices, will not be extended to any new markets and will be integrated into BBC.com over time. 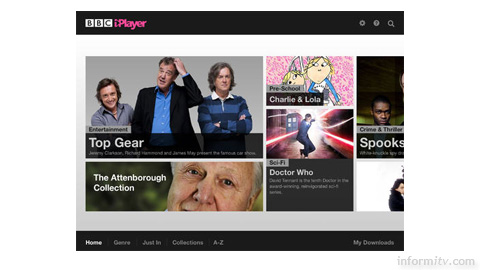 The global iPlayer was launched as a pilot in 11 Western European countries in July 2011, initially on the Apple iPad and subsequently the iPhone and iPod Touch, and viewable on an Apple TV using AirPlay. It provided access to a catalogue of premium programmes from the BBC library for a monthly subscription of €6.99, of which 30% presumably goes to Apple.

The trial service was extended to Australia and Canada but not the United States, where it faced opposition from pay-television operators carrying the BBC America channel.

There was also some criticism that the BBC did not offer a similar service to users in the United Kingdom, the domestic iPlayer being limited to recently broadcast programming.

After a year the global iPlayer app had received just over a million downloads, not all of which would have become subscribers. BBC Worldwide did not provide any figures in its most recent annual report.

In the year to March 2013, BBC Worldwide produced sales of £1.1 billion and returned £150 million to the BBC, which is about the annual budget of the BBC children’s channels CBBC and CBeebies. Consumer products, including packaged media, produced sales of £181 million, down from £211 million the previous year. In comparison, the wholesale distribution of channels and programmes generated sales of nearly £500 million.

The end of the global ambitions for the BBC iPlayer represents a failure to establish a standalone subscription model, which would have presented a challenge to the £3.7 billion income from the compulsory licence fee income levied in the United Kingdom.

BBC Worldwide will continue to licence its programmes other service providers, who will aggregate them as part of a much wider catalogue of titles.

The BBC Worldwide announcement comes a week after the BBC director general Tony Hall said “The iPlayer is the best in the world, but we want to make it even better.” He was referring to the version only generally available in the United Kingdom, which provides access to most programmes broadcast within the last week, likely to be extended to 30 days.

This was shortly followed by the announcement of a new role of Controller of BBC iPlayer, responsible for exclusive online programming and the premieres of shows in advance of the transmission on traditional television channels.

The new controller post will report to the BBC Director of Television Danny Cohen, who said: “From now on I want us to think of BBC iPlayer as having the same status and value as a linear channel service. In essence, it becomes our fifth channel, creating and sharing content alongside our linear services.”