The next step change in video displays will be a move to a resolution four times that of high-definition television. That is the message from the International CES trade show in Las Vegas, which provides an annual high-pressure barometer check for the winds of change blowing through the consumer electronics industry. If the manufacturers have their way it will be only a matter of time before we all want even higher-definition television.

So-called 4K displays, with a resolution of around 4,000 pixels across, were a prominent theme of the show, displacing the emphasis of previous years on smart and 3D-capable televisions, although these are still prevalent. So is this just another fad, in an attempt to create premium products as high-definition displays become commoditised, or does this represent the next natural evolution in television? 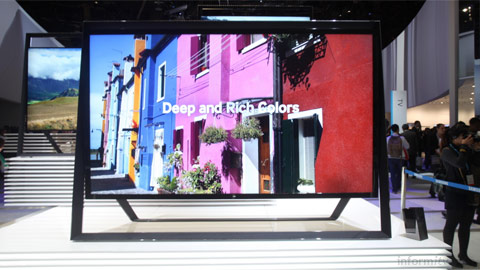 All the major display manufacturers showed 4K TVs, under various marketing names, either currently available, planned products or prototype demonstrations. As far as they are concerned, this will be the new industry standard. With screens of more reasonable sizes, the intended price points are also coming down. The starting point for a basic 50-inch screen will be $2,500.

The standard objections to resolutions higher than current high-definition television are that the difference will hardly be apparent to most people and that there will initially be little programming that takes full advantage of the format.

Sony and Panasonic have partnered to produce 4K panels using self-illuminating OLED displays. They were both showing 56-inch 3,840 x 2,160 pixel screens that were by all accounts amazing.

Some might say you have to go quite close to such a screen to see the difference. That is precisely how people tend to judge picture quality. One only has to observe people in a television store or an art gallery.

Interestingly, Panasonic also showed a 20-inch touch screen tablet with a 4K resolution. With an unusual aspect ratio of 15:10, it is around the size of A3 paper, or the double page spread of a magazine. The applications in design and photography are appealing.

If Apple were to produce a television display, as many expect, it would be disappointing if it were not a 4K resolution screen.

Text and graphics, and the high-resolution images produced by many consumer still cameras, particularly benefit from the extra definition of a 4K screen. Consequently, it may be non-broadcast applications that drive the adoption of higher-definition displays.

Video images can also benefit from upscaling, with interpolation providing a smoother image, even if it does not resolve more real detail. Indeed, upscaled Blu-ray discs can be difficult to distinguish from native 4K material.

Sony is planning to release “Mastered in 4K” versions of some of its titles, albeit delivered in 1080p format. It would be technically possible for Blu-ray discs to deliver 4K material, although it would require a new generation of players.

The emerging H.265 encoding scheme could provide better compression, although it is not a pre-requisite. One thing that is needed is industry agreement on standards, to avoid another format war.

Sony is planning to release native 4K titles for its own 4K video distribution service, with a dedicated 4K media player, which is planned for launch in the United States in the summer of 2013.

Netflix has also been showing 4K material streamed over the internet, although that will require a fast connection without a restrictive download cap. Nevertheless, we can expect to see such streams and downloads before long.

In Europe, Eutelsat has begun transmitting a 4K demonstration channel on its Eutelsat 10A satellite at 10° East. It will deliver 50 frames per second 2160 line progressively scanned streams in H.264 format at 40Mbps.

The world of 4K already feels closer this year. Most broadcasters seem unprepared for the change.

Even if resolution is the last thing most people complain about when watching television, it will be as difficult to sell an ordinary high-definition screen once 4K displays are more affordable. That is largely a function of volume. Before long, 4K displays will reach the mainstream and no doubt within five years most new television screens will be 4K. By then, the next objective will no doubt be 8K.