An update to the Apple iPad is expected to be announced this week, probably with a higher resolution screen, capable of displaying full high-definition video. We may also expect an updated Apple TV, with full high-definition capability. In anticipation, informitv indulges in a little speculation about why this could be another game changing development.

When the iPad was first announced in January 2010, informitv noted that it “falls short of expectations in its inability to display or output high-definition video”. At the time we pointed out that the iPad could serve as a portable interactive internet television and said it would be successful despite its apparent limitations.

The update to the iPad is expected to bring a screen resolution of 2048×1536 pixels. That is exactly four times higher than the first two generations of the device, which were limited to 1024×768 pixels. 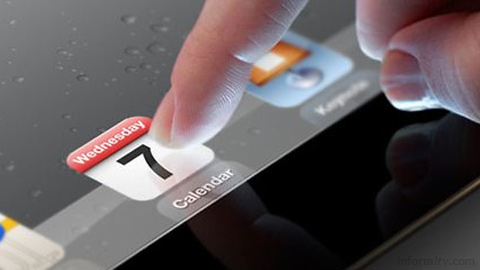 The doubling of resolution in each dimension means that existing applications will continue to work as before, although text will appear crisper.

The result will be far higher resolution than most screens. For comparison, a 27-inch Apple Cinema Display has an aspect ratio of 16:9 and a resolution of 2560×1440 pixels. That exceeds high-definition television by some margin.

The real significance is to allow 16:9 video to be displayed at native resolution of 1920×1080 pixels on the 9.7-inch 4:3 aspect ratio tablet display. In fact it leaves 64 pixels on both sides and 228 pixels above and below a full high-definition video frame.

Furthermore, it will allow the full frame of a 2K digital cinema image to be displayed at its native 2048×1080 pixels.

While some people may like to show off their 50-inch screens, the prospect of a display less than ten inches in diagonal with an even higher resolution may change the perception of what high definition can look like. The idea of watching movies and long-form video on a tablet becomes even more attractive.

Apart from the prospect of beautiful images on the tablet display, there is a further important implication of this. The tablet should also be able to output full high-definition video to other displays, either through a cable or more importantly using Apple AirPlay.

An update to the Apple TV is also expected. Like the iPad, this has so far been limited in its high-definition capabilities, being restricted to displaying video at 1280×720 pixels. With a faster processor, informitv expects this to be increased to support full high-definition at 1920×1080 pixels.

Paired with an iPad capable of streaming high-definition video, the Apple TV becomes less of a hobby and a lot more interesting.

In addition to an HDMI digital audio and video output, informitv has long argued that the Apple TV really needs an HDMI input. That would allow the output of an existing video source, such as a digital video recorder, to loop through the device without requiring the user to switch the input source on their display.

This is the one feature that Logitech got right with its Google TV Revue product. It allows that device to switch seamlessly between an external video source and its own user interface, or to overlay over the incoming video.

Furthermore, the HDMI specification includes provision for something called Consumer Electronics Control, a standard that allows remote control of connected devices. Consumer electronics companies tend to use their own trade names for this feature.

We can start to see how the Apple TV could become more of a media hub, with other Apple iOS devices as touch screen remote controls, media sources and viewers. Add to that voice control and integration with Apple iTunes and an app store and it becomes a formidable ecosystem.

That, of course, is without Apple producing its own television display, which could simply be a screen with the Apple TV functionality integrated.

The distinction between a tablet and a television then becomes more a matter of screen size than one of definition.