The global BBC iPlayer application, previously only available on the Apple iPad, has now launched on the iPhone and iPod Touch. It will also feature programmes other than those originally commissioned by the BBC. Apparently, three-quarters of subscribers access the app each day, although there is still no news of subscriber numbers or details of actual usage.

The extension to the iPhone and iPod touch significantly expands the addressable market. We are now talking telephone numbers — around a quarter of a billion units worldwide. 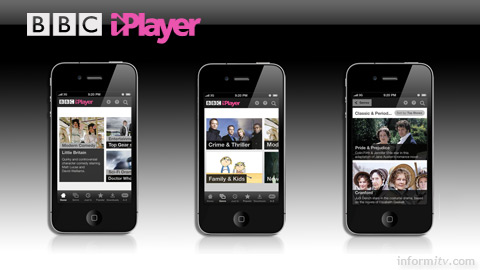 The app itself will only be available in a limited number of markets, including a number of European countries, Australia and Canada. It has yet to launch in the United States.

John Smith, the chief executive of BBC Worldwide said: “The global BBC iPlayer has seen great growth since the pilot first launched in July — both in terms of geographical expansion and technological developments. Moving to iPhone and iPod Touch allows us to take the service to a significant new potential audience and deliver fantastic programme content from the BBC and the UK’s creative industry.”

The Global BBC iPlayer will also feature independently produced programmes from other channels, notably Channel 4, on the premise that it offers the best of British television and culture to an international audience. This is consistent with the policy of BBC branded commercial channels.

Independent programme distributor DRG will provide programmes including the comedy Peep Show and Father Ted. These will only be available in certain European markets. One can anticipate that further programming will follow if the model is proven.

Two more curated programme categories will also be added, covering music as well as arts and culture. There are also plans to added selected radio programmes to the lineup.

In a presentation to the Digital TV Summit, Jana Bennett, the president of worldwide networks and Global BBC iPlayer, shared some findings about usage of the service.

She suggested that it overturned the Pareto Principle that suggests 80% of revenue will come from the top 20% of titles, saying: “VOD promises to break the 80:20 rule by creating availability and visibility of long tail content, enabling consumers to view (and therefore monetise) shows they would otherwise have simply been lying dormant.”

This is rather confusing, since the long tail distribution theory, popularized by Chris Anderson in an article in 2004 and subsequently in his best-selling book of that name published back in 2006, actually describes a form of Pareto distribution, in which the most frequently requested 20% of items actually represent less than 50% of all requests.

It is also somewhat misleading, since as a primarily subscription service, the value proposition is based on the aggregation of programming, rather than monetizing individual programmes. In that sense it is a conventional pay-television model.

Unlike the public service product available in the United Kingdom, for which detailed statistics are provided on a monthly basis, the commercial arm of the BBC is not surprisingly keeping any adoption, subscription or usage figures confidential.

However, she did reveal the surprising statistic that on average 75% of subscribers access the app each day, which is extraordinary. It is nevertheless consistent with anecdotal evidence we have heard from users, although of course this could be a feature of early adopters exploring the archive.

Apparently, an unexpected 35% of viewers are watching more than one programme per visit, and 25% go on to browse the app after watching a programme.

“This platform extension shows how Global iPlayer isn’t just about moving TV to tablet devices,” she said. “It’s also about a mobile strategy — about truly getting TV everywhere in a way that it hasn’t been before.”

As yet, the BBC iPlayer is not available on the Apple TV device. Of course, if Apple is indeed planning a television display product, as many anticipate, a library of programming from the BBC available internationally on a subscription basis could prove to be quite a selling point.