Delivering a reported 72 million live streams, the YouTube Royal Channel may have been seen by more people worldwide than viewed the coverage of the royal wedding live on television in the United Kingdom. If correct, that makes it something of a landmark in the short history of online video. However, widely quoted reports that the event would be seen on television by two billion people around the world are clearly questionable.

YouTube reported that the Royal Channel wedding coverage delivered 72 million live streams around the world to 188 countries. Together with those catching up with re-broadcasts later in the day, the total number of streams is claimed to have reached over 100 million on the day. The United Kingdom and the United States led the countries viewing live on YouTube, followed by Italy, Germany and France.

YouTube did not reveal the peak concurrent audience, a figure typically reported for broadcasters based on estimates from viewing panels. A week after the event, the Royal Channel indicates that it has received over 28 million video views since 2007. It is not clear how this corresponds to the claims of over a hundred million streams of the wedding on the day. 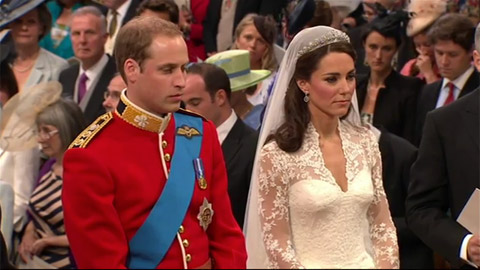 The three and a half hours of BBC coverage were carried as a clean feed, without captions or commentary. As such, it is a rather different viewing experience to the traditional television coverage, especially when viewed after the event, like a long and very expensive wedding video.

A spoof skit of the wedding produced by T-Mobile has also been viewed over 20 million times on YouTube.

Akamai reported record numbers of streams for the 25 or so broadcasters for which it delivered live streams of the Royal Wedding, with a higher peak number of concurrent users than previously seen for the World Cup.

Adding in viewers on ITV, Sky News and Sky Living, the combined peak audience reached an estimated 26.2 million. That is slightly fewer than the 28.4 million that watched the wedding of Prince Charles and Lady Diana 30 years previously, or the 32.1 million that viewed the funeral of Princess Diana in 1997. That was topped only by the England victory in the World Cup back in 1966, with an estimated 32.3 million viewers, at a time when there were only 15 million television households in the country.

The coverage was also broadcast through BBC Worldwide channels and the feed was licensed to over 40 broadcasters in 25 territories. BBC World News broadcast the feed live in 200 countries worldwide, with an addressable audience of 300 million households.

In the United States, Nielsen reported that the peak audience of 22.8 million viewers across eleven networks watched the wedding, which took place before dawn much of the country. Over 40 million watched NBC News coverage for at least part of the broadcast and 18 million videos of the wedding were streamed on MSNBC.com.

In India, an estimated 42.1 million watched the royal wedding, according to the rating agency Audience Measurement and Analytics.

The British culture secretary Jeremy Hunt had reportedly told cabinet ministers that the wedding was “likely to be a major global event viewed by around two billion people around the world”. That figure, representing more than one in four people on the planet, was widely reported across the media, including the BBC. Even if that is taken to be a reach figure of people that would see some element of the coverage, it seems highly implausible.

That did not stop The New York Times reporting that viewing estimates “hovered in the three billion range, give or take 500 million”.