Four years after the original introduction of Apple TV, Apple chief executive Steve Jobs announced one more thing, or one more hobby, as he put it — the new Apple TV, a quarter of the size of the previous product and at just $99 it is less than half the price. Despite speculation about the name, it is still Apple TV, although that is a misnomer as it has little in common with television, apart from being able to connect to a high-definition display. It remains a closed system, although that could change.

“We introduced Apple TV four years ago and we’ve sold a lot of them but it’s never been a huge hit and nor has any other competitive product,” conceded the Apple co-founder and chief executive. In the process Apple claims to have learnt what people want. They apparently want Hollywood movies and television shows in high definition. “They don’t want amateur hour. They want professional content.” 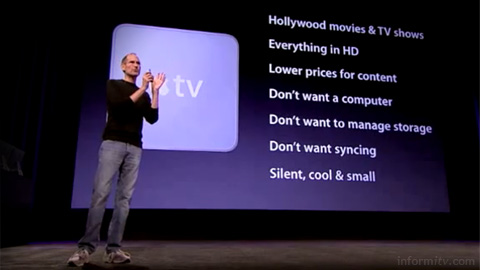 “They don’t want a computer on their TV. They have computers,” he said. “This is a hard one for people in the computer industry to understand.” They do not want to manage storage or sync to a computer, and they want any hardware to be silent, cool and small. “It’s really quite a bit different than a lot of other companies think. Either we’re right or we’re wrong but this is what we’ve heard from our customers.” 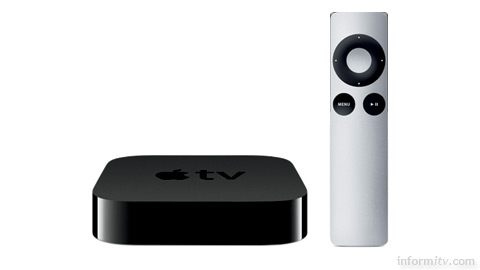 So the new Apple TV is tiny. Apple has a preoccupation with miniaturisation. It is also inexpensive, for an Apple product. Apple is hoping to make money on media based on a rental model. There is no on-board storage, so media is streamed to the device from the internet cloud. The price point is $4.99 to rent a movie the day it comes out on DVD. Individual episodes of television shows will be 99 cents each, without commercials.

“This is a big step for some of the studios to make and not all of them wanted to take this step with us,” Steve Jobs granted. In fact only ABC, part of The Walt Disney Company, in which he is the largest individual shareholder, and Fox are so far committed, together with BBC America. “We think the rest of the studios will see the light and get on board pretty fast.” 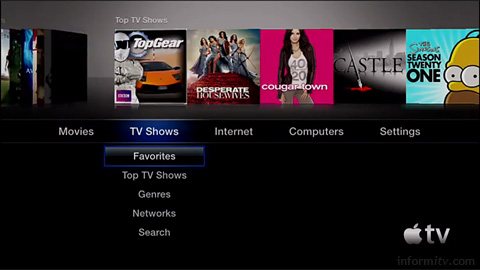 In the interim, Netflix subscribers can stream movies directly to the device for free, using what he described as “by far the best implementation of Netflix”.

They can use a supplied infrared remote control, or using a free application on an Apple portable device. They can also start watching a video on an iPad, iPhone or iPod Touch and then stream it wirelessly to their Apple TV, using a new feature in iOS 4.2 called AirPlay.

Will it be enough and succeed where Apple TV has so far failed to find the same enthusiastic adoption as with its portable products? Many analysts and commentators were underwhelmed. Yet Apple TV does deliver on many aspects of what people want from such a product, providing they buy into the Apple ecosystem. It certainly provides a slicker user experience than most network-connected television displays and will compete directly with other dedicated devices like those from Roku and Boxee.

The Apple TV still only offers 720p video, which is realistic for a streaming service, but will have to stand comparison with other devices capable of 1080p. Whether the processor is actually capable of delivering full high-definition is another matter.

The Apple box will use an ARM designed Apple A4 processor, similar to that in the iPad and the latest iPhone and iPod Touch. What is not entirely clear is whether it uses the same iOS operating system, which seems likely. Some aspects of the user interface, such as the indications of unviewed episodes and way that favourites can be rearranged, are similar to those on Apple iOS devices. 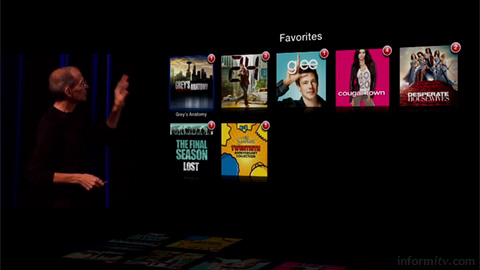 There is no mention of being able to run third-party applications from the Apple App Store, although that could conceivably follow. Much as Apple may wish to control the user experience, opening it up to independent developers will greatly increase its utility.

Unlike Google TV, Apple does not seem to be interested in integrating with television, seeing it simply as a source of episodic programming and a convenient high-definition display. People have often speculated that Apple could add this functionality to a television, but that presents problems of localisation that it can easily avoid by sticking to simple standards like a high-definition HDMI video output.

However, that means the Apple TV experience will always be a separate source to television, rather like a disc player, and will require another remote, even if that does happen to be another highly capable Apple device. Meanwhile, television manufacturers are increasingly incorporating similar functionality directly into their sets.

The problem is that television is not just about access to episodes of particular shows. It is a medium of social connection that is equally dependent on live programming, on a continuous flow of entertainment and information, on skilful scheduling, persistent promotion and serendipitous discovery. That is why people watch television for around three or four hours a day, which is hard for people in the computer industry to understand.

That said, if Apple can succeed in creating a new business model around individual payments for specific episodes at a sufficiently attractive price point, it could unbundle channels in the same way it broke up packaged music into individual tracks. That could be deeply disruptive to the established distribution networks, which is why Apple may have a hard time getting them all on board.