The BBC iPlayer is reaching over four million online video viewers a week in the United Kingdom, which represents an impressive reach of over 6% of all television viewers in the country. However, the audience peaks at around 135,000 concurrent video viewers and just 35,000 simultaneous online radio listeners, according to the latest figures. That could change if more people are able to access the service on their television. The BBC also released images that may suggest a new native application in development for the Apple iPhone, which appears to feature the option to download video, rather than simply stream it in a browser.

Jo Hamilton, the head of audience measurement at the BBC, released details of the latest online viewing figures. The pack contained images of an iPhone iPlayer application that appears to offer a download option. 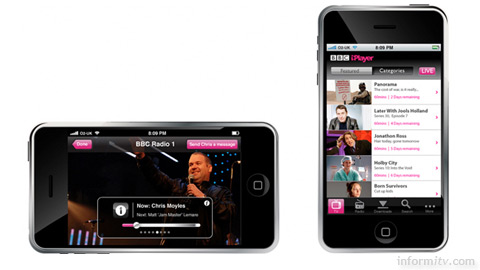 The current BBC iPlayer service on the iPhone is browser based. It delivers around 7% of online video viewing for the BBC. It does not enable programmes to be downloaded for later viewing. The figures from the BBC suggest that downloading is far less popular than streaming, representing only 3% of usage, but that could change if the option were made more easily available for mobile devices like the iPhone and iPod Touch.

In October 2009 there were nearly 80 million online requests, of which 52 million were for video programmes, which is around 1.7 million a day, compared to 1.1 million a day at the start of the year. These online figures all exclude any usage on Virgin Media cable, which would add another 10 million or more views a month.

On a weekly basis, the number of unique user agents peaked at just over 4 million for video and 1.3 million for radio. The interest in iPlayer was boosted by 928,000 requests for a particularly controversial edition of the political panel programme Question Time.

Beyond that, the most requested programmes in October were the first two episodes of the natural history programme Life, producing 664,000 and 474,000 episodes respectively. The soap opera EastEnders perhaps predictably dominates the top twenty programmes, reaching over a third of a million downloads for one episode.

The top twenty programmes accounted for 7.4 million requests, around 14% of the total, implying a long tail of titles with far fewer requests.

Radio programmes produced less than 100,000 requests per episode, with the exception of live coverage of an England football game, which reached just over 150,000.

The Apple iPhone and iPod Touch delivered 7% of video requests, adding to 9% from Mac machines, and 6% from the Sony PS3 games console, for which support was recently added. The remaining requests were from Windows personal computers, with other platforms making up less than 2%.

For radio, a growing proportion, approaching 70%, is for simulcast listening online, as opposed to programmes streamed on-demand, although this excludes the use of podcasts.

The profile of online video viewing through the day is similar to that for television, with a pronounced peak in the evening. However, while the television audience in the United Kingdom peaks at around 35 million across all channels, the iPlayer only reaches a maximum concurrent audience of 134,000 users, while the peak for online usage in general across the country is closer to that of television, at 29 million.

The profile for online listening follows that of traditional radio audiences, although it peaks late in the morning, with 35,000 listeners, compared the total radio audience around breakfast time of 15 million.

So, while the iPlayer is seen as an undoubted success, the scale of its usage should not be overstated against the background of traditional television and radio viewing and listening.

It is certainly not a significant substitute for live television or radio broadcasting, with an average daily peak of 134,000 concurrent users.

The reach is more impressive, at over 5 million users a week. With around 4 million of them viewing video, within a population of some 60 million people aged over 4 years, that representing over 6% of the available audience.

Yet iPlayer appears to be delivering a valuable public service to those that use it. Over 900,000 users wanted to view online a particular edition of Question Time, compared to its record audience of nearly 8 million on television, nearly three times its normal audience.

The point of on-demand viewing is that it is complementary to the mass audience of broadcast television, and follows similar trends. Although 14 million online video requests a week sounds like a lot, it must be seen in the context of an audience of nearly 60 million people watching 27 hours of traditional television a week