A new commercial for Toshiba used 200 camcorders arranged in a ring to create what they call a time sculpture. It is a metaphor for the benefits of upscaling standard definition images to high definition displays. Upscaling is nothing new, but the campaign shows the power of creative television advertising.

The technique is a development of the slice-of-time three-dimensional representation of a single moment that has previously been seen in movies and adverts. 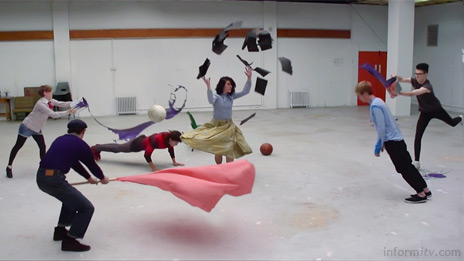 Rather than still cameras, it employed 200 Toshiba Gigashot HD camcorders in a ring around the action to record moving images. The elements were captured separately and then composited together as a moving sequence. Over 20 terabytes of image data were processed to create the moving moments of time. 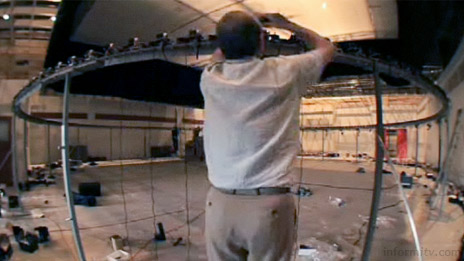 The advert is notable in many ways. Not least because it employed Toshiba consumer camcorders to create the effect, possibly the largest number ever employed in a single shoot, demonstrating a certain confidence in the product. It also exhibits the ability of creative advertising to attract attention and interest and to communicate complex messages through the power of analogy. The £3 million British campaign, with 60, 30 and 20 second spots, has also been backed by public relations support to amplify its effect and underscore the key messages. 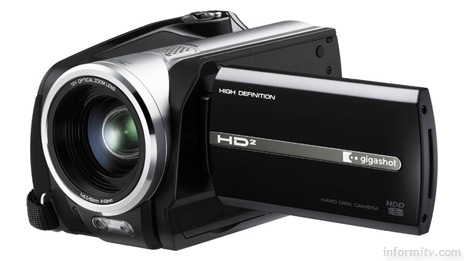 Toshiba says that with 99 percent of television programming in Britain still broadcast in standard definition, consumers that have purchased ‘HD Ready’ displays have been left confused and dissatisfied at the lack of free-to-air high-definition broadcasts. Toshiba claims that its upscaling display technology bridges that gap.

The commercial addresses the paradox of how to portray the benefits of high-definition in a standard definition signal. The interpolated images of the time sculpture become an artistic visual interpretation that captures the imagination.

“Only a visual metaphor of the magnitude of Timesculpture could represent the step change you’ll get from standard definition screens,” said Jon Williams, the chief creative officer of communications agency Grey London, part of the WPP group. “It’s a celebration of what Toshiba innovation can do for people, itself made possible by Toshiba technology.”

“The case for upscaling technology is laid bare for all to see,” explained Matt McDowell, marketing director at Toshiba. “As people rush out to buy their HD Ready TVs, believing their investment will automatically deliver enhanced visual quality on-screen, they should consider that there’s actually very little HD content out there to view. Our TVs, whilst remaining future-proof, offer customers the chance to watch TV and DVDs at near HD quality at the touch of a button.” The technology is provided in the latest Toshiba laptops, DVD players and televisions.

The timesculpture technique was developed by director Mitch Stratten at Hungry Man. Post production was by The Mill. The spot can be viewed on the Toshiba web site, together with a short video showing how it was created.