The ABC in Australia is expanding its online service with five new web channels, allowing users to watch television shows on the internet in a full screen player. It includes a catch up channel, showing a selection of programmes from ABC1 and ABC2, as well as news, documentary, arts and children’s channels and an ABC shop which previews programmes available for download.

“We think that we’re doing something that no-one else in Australia has done yet,” said Kim Dalton, head of ABC television. “We’re way out in front, again, and we think we’re offering our audiences a service that they’re going to, once they get to know us and get familiar with us, they’re really going to embrace and use a lot.”

The ABC iView service has some similarities with the BBC iPlayer in the United Kingdom. It was designed and built by ABC Innovation with collaboration from the ABC TV Multiplatform unit.

Audio and video are streamed at 650kbs. Programmes will generally be available for up to 30 days. Programmes can be added to a playlist, so they can be viewed one after another as a virtual channel. 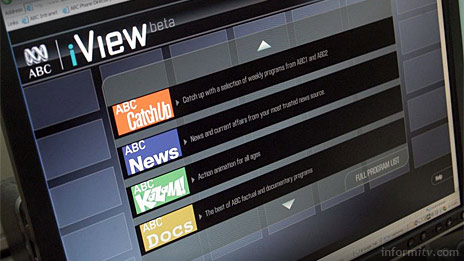 The ABC says it is in negotiation with internet service providers to offer unmetered access to ABC iView. “We are negotiating actively with ISPs to exclude ABC iView from their download caps,” said Abigail Thomas, head of strategic development at ABC Innovation. So far, iinet is the only one that seems to have signed up the scheme.

Currently only around 35% of Australian internet users have a connection of 1Mbps or more needed to use the service, but this number is expected to increase. A number of comments in the forum on the ABC web site suggested that some users were having problems with the service.

It works on PC, Mac and Linux platforms, using Adobe Flash, without specific digital rights management. For rights reasons the iView service is only available within Australia.