Academy Award-winning actor and critically acclaimed screenwriter, director and producer Tim Robbins delivered an electrifying opening keynote speech at the NAB Show in Las Vegas. It appeared that there was some doubt as to whether he would deliver the speech, which turned out to be a damning condemnation of the state of broadcasting in America, but he gave it anyway, urged on by the audience.

He had been asked to speak about the challenges of new media and delivery systems. “I’m not sure what that f***ing means,” he confided, as he stood to deliver his speech at the lectern, encouraged by calls from the audience for free speech to abandon the scheduled friendly fireside chat format.

It may have been staged, but if so it was artfully arranged by one skilled in the craft of acting and direction. The star of the Robert Altman film The Player went on to write, produce and direct Dead Men Walking and receive an Oscar for best supporting actor in Mystic River. 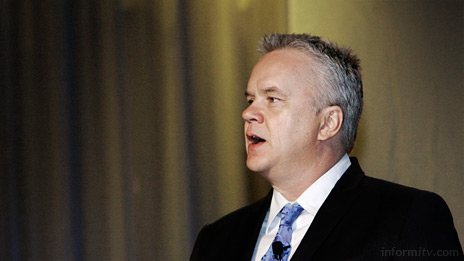 His speech was billed as a look at “the changing face of entertainment and how new distribution and content creation opportunities will impact Hollywood and other industries”. Instead, he took the opportunity to deliver an indictment of the state of the broadcasting industry in America.

“Just when we are getting close to a national consensus on news along comes the internets,” he mocked.

“Just when we were getting close to a national music playlist, along comes satellite radio that actually plays music people want to hear.” This was an uncomfortable reference to the proposed merger of XM and Sirius satellite radio, which the NAB has lobbied against.

He was highly critical of the lack of diversity in discourse, satirically urging broadcasters to eliminate confusing, complex issues. “You only need two opinions,” he quipped. “Stay focused on sex scandals,” he suggested. “It’s a moral responsibility to distract.”

“We are at the abyss as a country and an industry,” he said. It was, he admitted, “not the stuff of keynote addresses.”

“We are at a critical juncture in this nation’s history,” he said. “This is a nation divided and reeling from betrayal and economic hardships.” Yet he said “the broadcasters of this great nation have a tremendous power and potential to effect change.”

Known for his liberal views and criticism of the war in Iraq, he said that broadcasters could lift us into a more enlightened age — or hide behind the being a business and just doing what the audience wants.

“We don’t need to live off of the pain and humiliation of the unfortunate. We don’t need to celebrate our pornographic obsession with celebrity culture. We are better than that,” he said.

He urged the audience to leave behind formulae and focus groups. “Now is the time to recognize that you are not just businessmen,” he urged, “but guardians of the human spirit with a responsibility to the health of the nation.”

“Imagine a new broadcasting industry aesthetic, that respecting the better nature of the American people, produces shows that promote strength instead of fear, that does not divide, but inspires, that does not promote hate, but unity, that will not tear the weak down, but build up their strength.”

“The road we are on is leading us to a corruption of our former selves,” he said. “We are better than that.”

“There could be money to be made in appealing to our better selves,” he suggested. “And if there isn’t and we came out of it a little less rich but more unified and healthier as a nation wouldn’t that be something we could all be proud of?”

To many in the audience it may have seemed like an historic rhetorical moment, reminiscent of the 1958 speech by Edward Murrow that warned television risked becoming simply “wires and lights in a box,” or the 1961 speech by Federal Communications Commission chairman Newton Minow who famously described television as a “vast wasteland”. 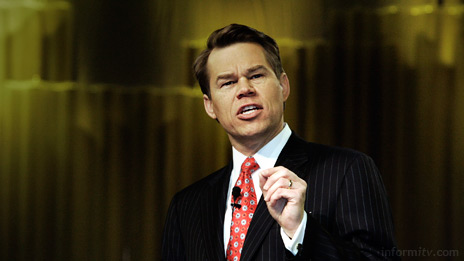 “I think we can all agree, what you find on YouTube is a different world,” said the presidential NAB executive. “Is our model broken?” he asked. “Has technology and cultural change made us no longer relevant?”

“We know that the world has changed. Consumers have more options than ever before. The media landscape is rapidly changing,” he observed. “We’re being buffeted by forces larger than our industry. Some in the business are a bit disoriented. Some are overwhelmed by the changes taking place. Frankly, some are not optimistic about broadcasting’s future.”

“Some people in this business have been staring so long at the door that’s closing,” he said. “They haven’t seen the new door that’s opening: the digital door.”

“There are immense changes happening in television broadcasting,” he continued. On 17 February 2009, most analogue television signals in America will cease. “One door closes, but another opens. It’s the door to a new life”. He said “the transition to DTV is NAB’s highest television priority”.

He also observed that with the majority of homes in the United States having a broadband connection “we must begin to make the internet part of our DNA.”