Pundits have begun to proclaim an end to the high-definition disc format war, declaring a victory for the Blu-ray Disc led by Sony over rival HD DVD backed by Toshiba and Microsoft. The war may not be over, but now with the backing of five major studios, the end may be near. But the real battle may come with movies delivered online or on-demand.

On the eve of the International Consumer Electronics Show, Warner Bros announced that it would be dropping support for HD DVD. Only two of the remaining major Hollywood studios, Universal and Paramount, remain committed to HD DVD. Even that support may be waning, with reports that they will no longer exclusively support the format. 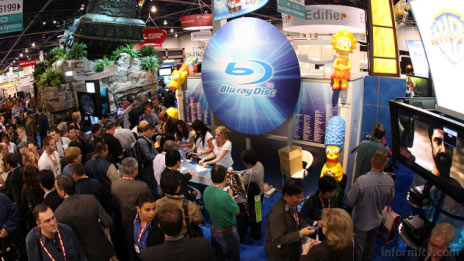 Toshiba is maintaining its backing for HD DVD but Microsoft is notably restrained in its encouragement, although it has said it is totally committed to the format and has now plans to build Blu-ray devices.

Sony famously lost the home videotape format war with Betamax to the VHS format developed by JVC in the 1980s. This time around, Sony has the advantage of owning a Hollywood studio, and having built a Blu-ray drive into its successful PlayStation 3 games console.

The Blu-ray Disc Association notes that 67% of all high-definition titles sold worldwide in 2007 were in the Blu-ray format. By the end of 2007, some six million discs had been sold in the United States. This must be compared to the millions of standard definition DVDs that are sold, although that number fell for the first time last year, down around 5%.

While high-definition may be the future, for many consumers it may not offer sufficient benefits to upgrade. In the meantime, a more significant battle may be looming, between packaged product distributed on disc and other digital media delivered online or on-demand.