Viewers of the Video Game Awards on Spike TV through DIRECTV or Dish Network will have the opportunity to interact using an application provided by Ensequence. It is understood by informitv to be the most widely deployed interactive application so far seen in North America.

The Video Game Awards air on Spike TV, from the MTV Networks Entertainment Group, a division of Viacom.

The show pays tribute to the best games, designers, animation, technology, music and performances of the past year in the world of video games. 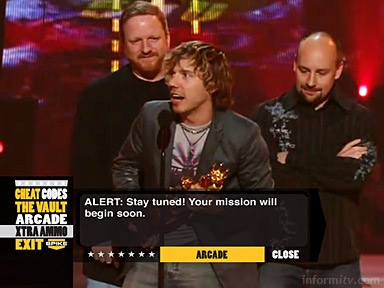 Viewers on either DIRECTV or Dish Network are able to use their remote controls to access cheat codes for their favourite games, watch trailers for forthcoming game releases, or play a classic arcade game on their television.

“The fans of all our MTV Networks brands crave a deeper level of interaction and ITV is emerging as a powerful tool for us to meet that need,” said Denise Dahldorf of MTV Networks.

It is the first time that an interactive application has been made simultaneously available on both the major satellite television networks in America.