The creators of an open source broadband video player are holding up their Miro product for positive comparison with closed proprietary platforms. The Miro player is now being promoted as being “better than Joost”.

Miro has been developed by the non-profit Participatory Culture Foundation and was formerly known as the Democracy player. 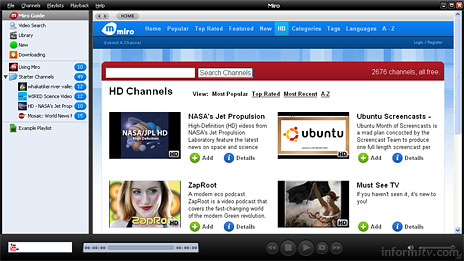 “We feel ready to be held up next to any competition,” said co-founder Nicholas Reville revealing the latest preview version, as the player nears final release. To support the claim that the product is “better than Joost” the creators of Miro have published a comparison between the two platforms.

“Building a gatekeeping system for internet TV is a terrible direction for the future of media,” he said. “In contrast, Miro is an extremely open system.”

The Miro software is open source. Anyone has the right to modify the software and anyone can publish to the peer-to-peer platform. Miro claims to have ten times as many channels as Joost, although some have observed that both platforms have limited premium quality programming.

The co-founder of the Participatory Culture Foundation said that Joost had received a lot of hype but described it as a pretty dull product. “Their content selection is mediocre and their user base has grown much more slowly than you would expect given the amount of attention they’ve received,” he said. “Joost simply isn’t very interesting to watch.”

Irrespective of comparisons to Joost, the Miro player stands up well against the offerings of many major broadcasters — and its completely cross-platform.