An invaluable archive of films on art is being made available over broadband through a collaboration with BT. The Roland Collection is the result of a lifetime project by film director and former art dealer Anthony Roland.

For over forty years, Anthony Roland has been a passionate believer in the medium of film in the context of fine art. A notable art film director in his own right, he has assembled an archive of over 500 films about art by over 200 directors. They have been made available on film and video for many years for use worldwide in schools, colleges, libraries and universities. 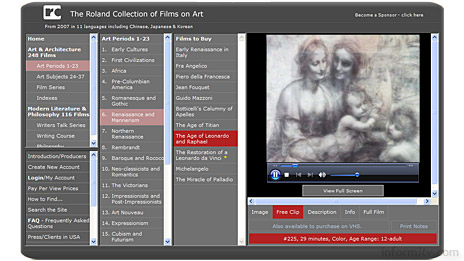 An early adopter of the internet, his first web site launched a decade ago. It employed MPEG-1 video clips and was one of the first such online collections in the world.

The launch of the new Roland Collection of videos took place at a reception at the top of the BT Tower in central London attended by informitv. The availability of the archive online is the result of two years of work with the telecommunications company which has now digitised the entire archive.

The collection features 300 hours of carefully catalogued video, covering art history from ancient cultures to modern and contemporary artists. It also includes conversations with over 100 authors. Impressively, the web site will be made available in 11 languages, including two Chinese versions, using an automatic translation system from French company Systran.

Previews of the films in the archive are available for anyone to view. Full-length videos can be streamed or downloaded on a rental or subscription basis from £1.33 each. The videos are encoding using Microsoft Windows Media technologies with digital rights management at up to 750kpbs.

The web site employs a scrolling menu system that appears rather cumbersome but is actually quite effective. Although not available through the web site, another more visual way of accessing the collection was demonstrated using a video mosaic browser system that Anthony Roland calls “image mining”.

Running from a local hard drive, this provided an impressive demonstration of the power of visual interfaces that could be available with very high speed broadband access in the future. The technology is already being used by some broadcasters for weather, travel and election graphics presentation.

Some of those present at the launch suggested that the collection was of such educational value that it should be made freely available.

While some corporate sponsors have contributed to the creation of the web site, with BT providing the digital media technology, Anthony Roland said that “to provide it at no charge would require the intervention of a few major corporations or state organizations”. He pointed out that institutions could licence the entire collection but added “the door is open for financial support from appropriate companies or individuals.”

It could, for instance, be a resource that BT could consider making available in Britain through its recently launched BT Vision broadband video service. Or perhaps Microsoft could make it available to every home that uses its IPTV Edition platform.