UKTV, the joint venture between the BBC and Flextech, is to use Ensequence software to deliver interactive television across its portfolio of 10 channels on the Sky satellite platform.

The UKTV network of thematic channels includes classic archive, history, drama, documentary, food and lifestyle programming. It is an independent commercial joint venture formed in 1997 between BBC Worldwide and Flextech Television, the content division of NTL.

As part of a three-year licensing agreement, UKTV will exclusively use Ensequence on-Q authoring, publishing and playout software to create and deliver interactive applications to enhance and support individual programmes.

The first interactive applications to use the system will be support of coverage of the World Cup on the UKTV G2 channel. The applications will support on-air programming throughout the tournament, promoting UKTV mobile and web site activity and enabling viewers to participate in football competitions. 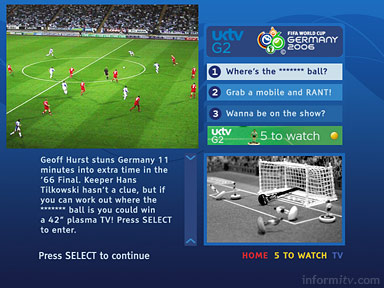 UKTV apparently expects to deliver significant numbers of different interactive applications, initially developed from 10 core templates that can be re-versioned and re-skinned into distinct services. They will also provide commercial partners with lead-generating opportunities and a dedicated sponsors’ area.

The interactive applications will be hosted and played out by Red Bee Media, formerly BBC Broadcast, which provides playout and promotion services for BBC, UKTV and Flextech channels.

“A great deal of consideration has gone into both defining the new proposition for UKTV’s red button services, and the selection of Ensequence from a strong shortlist of the UK’s leading iTV solution providers,” said Andrew Watt, head of new media at UKTV. “From concept to finished product, Ensequence software will reduce our time-to-air and provide significant cost savings by making interactive TV production and testing fast and simple.”

UKTV is pledging a commitment to so-called ‘red-button’ interactive services, accessed through the television remote control, saying its decision to appoint Ensequence and embark on this three-year project “underlines our belief that the red button has a valuable role to play within the network’s interactive proposition”.

John Holland, managing director of Ensequence International, based in the UK, called it “an extremely significant deployment”.

“Red button is alive and well and one of a number of means by which viewers will interact,” he told informitv.

Aslam Khader, responsible for marketing and strategy at Ensequence, spoke of a number of further deals in the works, as operators move from earlier “rather esoteric technologies” into the next phase of interactive deployments and “see the benefits of being able to accomplish more with less”.

“This really is about scale,” he said. “It marks the migration from custom development to a tools-based approach and allows applications to be regularly churned to keep the content and approach fresh.”

Ensequence sees this approach being replicated in the United States. Aslam noted that Ensequence is engaged with all the major cable, satellite and IPTV operators, who he said are now making a significant investment in interactivity.