Television over the internet could revolutionise broadcasting, according to the results of a consumer trial of the BBC integrated Media Player, revealed at an international conference by Ashley Highfield, the BBC director of new media and technology.

Television over the internet could revolutionise broadcasting, according to the results of a consumer trial of the BBC integrated Media Player, revealed at an international conference by Ashley Highfield, the BBC director of new media and technology.

At the MIPTV/MILIA conference in Cannes, Ashley outlined the net results of the iMP trial which allowed a representative panel of 5,000 users to download BBC television and radio programmes over the internet. 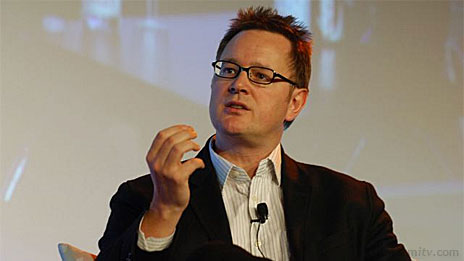 The BBC director of new media and technology, who admitted that he had been pleasantly surprised at how well the secure peer-to-peer delivery system had worked, said: “It provides the first significant clues as to how TV programmes over the internet could revolutionise broadcasting, and prompt a wider, cultural shift in television consumption.”

Presenting to a room of programming professionals he stressed: “I’m not a swivel-eyed looney that sees the end of conventional television overnight”. Nevertheless, he clearly sees a considerable future in downloading programmes.

The response of those involved in the trial was also positive. Three quarters of those that tested the service said they would recommend it to a friend. Although initially more popular with male users, by the end of the trial it apparently appealed equally to male and female users. Significantly, usage was consistently maintained throughout the trial, across most genres, with comedy, drama and documentaries being the most popular. 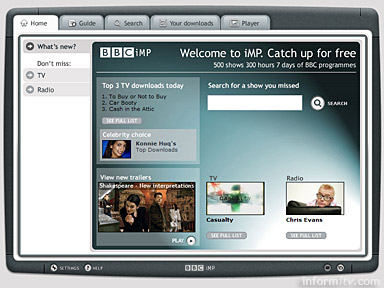 The 5,000 users downloaded 150,000 programmes during the four month trial, although they only apparently watched around than half that number. The main reason cited for this was the limitation of the seven day period after transmission in which the programmes could be viewed. A quarter of the users said the download speed could be improved, but over three quarters said they would not compromise on quality for quicker downloads.

Despite a relatively limited range of programming, which most users wanted to see extended, active users downloaded around 13 programmes a month and watched on average two programmes a week, equivalent to 6% of all BBC viewing in a typical household.

The top five programmes accounted for a quarter of all the viewing, but other niche material was also well represented, reflecting the so-called ‘long-tail’ effect. Practically every programme that was made available was consumed by someone. As a result, documentaries turned out to be the most popular genre over all. Around a third of the users watched a programme about which they had not previously known, suggesting a new form of serendipitous discovery that undermines existing assumptions about linear channel scheduling and presentation.

“That was a real insight for us,” said Ashley. “There has been no real demonstration that the long tail would work in television. Who knows what proportion of overall television consumption the long tail could account for.”

Most of the viewing took place between 10.00pm and 11.00pm, after the traditional television peak viewing hours. This apparent shift in television consumption is consistent with the results of early video-on-demand trials with NTL and Telewest.

The iMP player was created and developed by the BBC new media and technology division, in partnership with Siemens, Red Bee Media, Kontiki and Microsoft.

The results of the research will feed into the development of the proposed project which currently has the working title of MyBBCPlayer, which the BBC hopes to launch later in the year, subject to a market impact analysis by the communications regulator Ofcom and approval by the governors.

The BBC is in discussions with other broadcasters about how they might co-operate in television downloads, although the BBC plans to initially launch its service on an exclusive basis. It was confirmed that BBC Worldwide is looking at a commercial international deployment.

Ashley suggested that the BBC would like to extend the usage window to allow users to download programmes within seven days of first transmission, but to be able to watch them for some time outside that period.

A major cause of irritation in the trial was that programmes would expire before they could be watched, whereas they could be stored indefinitely on a personal video recorder. Since a series could be bookmarked and downloaded automatically, this would potentially allow programmes to be viewed beyond the seven day window currently negotiated with producers.

Ashley was asked whether the project would ultimately undermine the television licence fee, which does not currently apply to programmes that are downloaded on demand. He suggested that this might require a change in the regulations but did not consider that a major issue.

With online search and portal players also entering the market, Ashley suggested that broadcasters still have a place in packaging and presenting their programmes and in understanding their users.

“It doesn’t mean that we won’t distribute through Google,” he said. “My aim is for them to act as partners, so that we come up in their search results but I would like the programme to come from the BBC.”

Having apparently cracked some of the problems of legitimate peer-to-peer download distribution, the BBC is now working on the potential of peer-to-peer for the delivery of live streams, an approach already used by pirates to distribute programming around the world.

It seems the network television revolution has already begun.