The Olympics once again comes to interactive television, with extensive coverage of the 2006 Winter Olympics in Turin being complemented by the use of innovative technology in both Europe and the United States.

The Olympics once again comes to interactive television, with extensive coverage of the 2006 Winter Olympics in Turin being complemented by the use of innovative technology in both Europe and the United States.

Digital viewers to BBC television are able to receive some 500 hours of programming, up to 15 hours a day, through a choice of up to four extra screens, offering live events and news round-ups. The multiscreen service is similar to that for the last Summer Olympics, and indeed the last Winter Olympics, supported by news, results, medal tables and a viewing planner.

Broadband users in the UK are also able to access five channels of simulcast coverage, together with on-demand highlights. 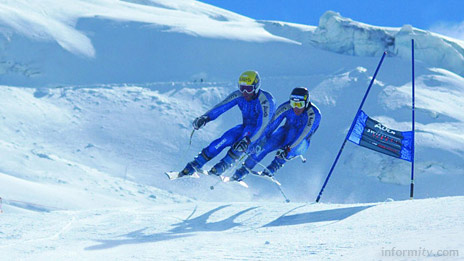 SimulCam provides a composite picture of two participants apparently competing at the same time, demonstrating where time is won or lost and the different lines taken.

StroMotion is used in skating and snowboarding coverage to show a composite series of frames to illustrate body position and technique.

The patented technologies are provided by Dartfish and automatically compensate for differences in camera angle between two recorded performances and detect the position of moving objects. The technology has been successfully used in a number of major world sporting events.

MHP in Europe
Elsewhere in Europe, the MHP Multimedia Home Platform is being used to deliver interactive services to suitably equipped viewers.

German broadcasters are using an MHP interactive application provided by Alticast, offering results, medal tables and other information accessible through the remote control.

NBC
In the United States, there are signs that interactive television and video services are becoming more mainstream, with strong support from NBC, which holds the rights to the event.

NBC and the EchoStar Dish Network will be following up on the success of their 2004 Olympics coverage with a multiscreen Winter Olympics showcase, allowing viewers to monitor and select six channels from a single screen. 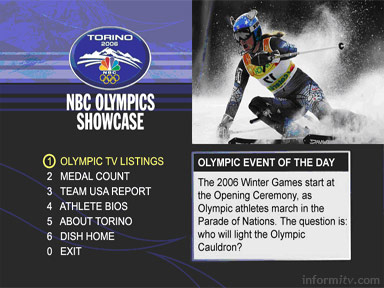 For the first time, NBC is also making available free video-on-demand Olympic material during the Games through a variety of cable and satellite providers.

Time Warner Cable customers in some markets will have access to NBC Olympics NOW interactive applications, produced in partnership with BIAP Systems. Viewers can simply press ‘select’ when tuned to any of the NBC Olympic Networks to launch an interactive service providing access to information and background facts and statistics.

NBC is teaming up with TV Guide, with an NBC Olympics icon providing access to programme listings and information on the Winter Olympics in some 14 million homes with TV Guide Interactive.

NBC is also providing Google Video with hundreds of previews, highlights clips that link to the NBCOlympics.com site, as well as highlights for download.

“Our unprecedented network and cable coverage this year will provide viewers with a more extensive and interactive Olympics experience including up-to-the-minute updates and medal count,” said David Zaslav, president of NBC Universal Cable.