The BBC is taking its interactive media player, iMP, to the next level with a limited three month public trial starting in September.

The service is designed to allow UK viewers the chance to catch up on TV and radio programmes they may have missed for up to seven days after they have been broadcast, using the internet to legally download programmes to their home computers.

A technical trial took place last summer with a limited number of participants and a small amount of rights-cleared programmes to test the concept of using peer-to-peer technology and digital rights management.

The next phase will extend to around 190 hours of television programmes and 310 radio programmes, as well as local programming and rights-cleared feature films.

Five thousand people from across the UK will take part in the pilot. They will be able to search for programmes they want to watch, filter programmes by channel, select subtitles and, in the case of some series, to collect and watch episodes that they may otherwise have missed.

The pilot will be used to assess the demand of particular types of programmes and determine whether iMP has an impact on the commercial market. This will assist the BBC Governors in evaluating its public value.

The service will use a peer-to-peer distribution system from Kontiki, combined with lookups on IP addresses to attempt to restrict usage to within the UK.

Digital rights management will be used to ensure that programmes can only be viewed up to seven days after the original transmission and to prevent further distribution of the files.

The Kontiki system is already being used by the Open Media Foundation for a public beta test of a public service to allow controlled peer-to-peer distribution of rights cleared audio and video. 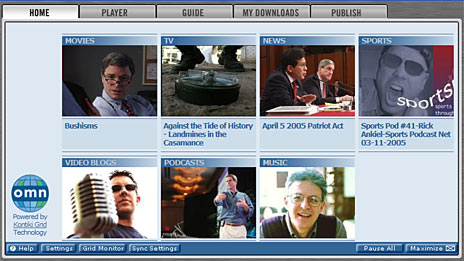 At Mediacast in London last week, Ashley Highfield, director of new media and technology at the BBC, outlined the explosive uptake of broadband and the increasing numbers of people using the internet to access audio visual material. He said that iMP could be the iTunes for the broadcast industry, enabling the audience to access our TV and radio programmes on their terms.

He added, however, that take-up was in danger of stalling without the necessary content to attract audiences, the lack of which was due to issues with rights, distribution and navigation. He said the BBC is looking to tackle these issues through services like Creative Archive and iMP, and called on the industry to do the same.