SBC Communications is to buy AT&T for around $16 billion in shares, creating the largest communications company in the US, as the telephone industry is transformed by the emergence of integrated services based on internet protocols.

The acquisition of the long-distance carrier would re-unite the “Baby Bell” with its parent “Ma Bell”, whose history dates back to the origins of the telephone industry, and is likely to attract the interest of regulators. It increases the likelihood that competing carrier MCI could be acquired by another regional telephone company such as Verizon. The takeover of the two largest long-distance carriers has been seen as inevitable as the Baby Bells expand their service mix. 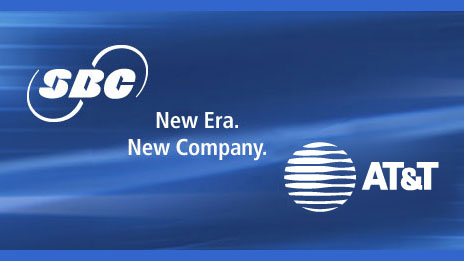 The acquisition combines SBC’s local exchange, broadband and wireless services with AT&T’s global capabilities and corporate customer base. Both companies are investing heavily in internet protocol technology to deliver the next generation of communications services, including IPTV.

SBC has dubbed its plans for a new range of unified communications services the ‘U-verse’. The company is planning to use Microsoft software to deliver television programming over broadband networks, as part of a wider initiative known as Project Lightspeed. In the meantime, SBC has also announced an integrated satellite and broadband service combining EchoStar programming with video on demand.

The combination of SBC with AT&T will “build a company that will lead an American communications revolution in the 21st century,” said SBC chairman and chief executive officer Edward Whitacre. “The communications industry is undergoing a profound transformation as it transitions to unified, IP-based networks capable of delivering a host of integrated services,” Whitacre said. “We will renew America’s leadership in communications technology, with products and services that set the standard for how businesses and individuals communicate.”

Edward Whitacre will serve as chairman and chief executive officer of the new company, while AT&T’s David Dorman will serve as president.

With regard to the company name, Whitacre said, “We value the heritage and strength of the AT&T brand, which is one of the most widely recognized and respected names throughout the world, and it will certainly be a part of the new company’s future.”

Originally known as the American Telephone and Telegraph Corporation, AT&T’s roots stretch back to 1875, with founder Alexander Graham Bell’s invention of the telephone. AT&T then became the parent company of the Bell System, which in 1984 was split into separate companies, known as the Regional Bell Operating Companies, RBOCs, or ‘Baby Bells’.