Virgin Media gained just 2,100 new customers for its television services in the United Kingdom over 2016, despite adding 10,500 in the second half of the year. It now has 3.73 million television subscribers, which is around the same number it had in mid-2010. Including Ireland, Virgin Media has just over four million television customers, 4,033,900 to be precise, which is 36,400 fewer than a year previously. However, it has 5.28 million internet customers.

Virgin Media owner Liberty Global posted a 39% increase in net additions to ‘revenue generating units’, up over 300,000 in 2016, which it claimed to be its best result since 2009.

62% of customers now take a triple play of video, voice and internet. However, customer churn increased to 14.8% in the fourth quarter of 2016, reportedly driven by a price rise in November.

The number of two-way cable homes passed in the United Kingdom increased from 12.89 million to 13.60 million in 2016. That includes 256,000 commercial premises that Virgin Media now considers could subscribe to its services.

Yet the net number of homes subscribing to Virgin Media cable television has remained resolutely flat since 2010. It could be worse. It could have declined. Including Ireland, it did. It has 56,300 fewer there than five years previously, a 17% fall. 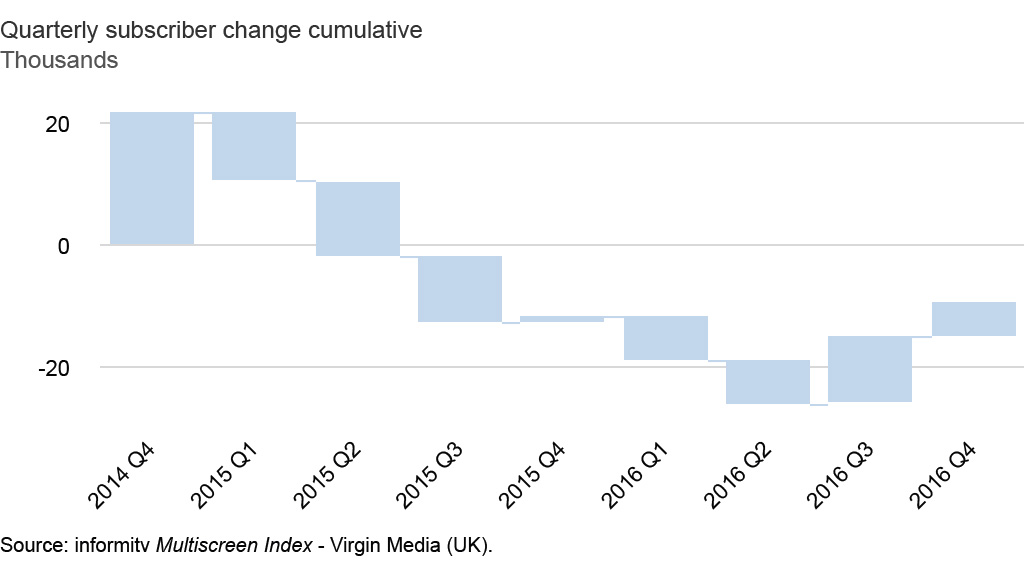 So far, Virgin Media has largely been able to retain television customers in the United Kingdom, while promoting high-speed broadband as its hero product. Virgin Media gained 221,800 internet subscribers in the course of 2016, ending the year with 4.92 million internet, out of a total 5.28 million customer relationships, including over 3 million mobile customers.

Total revenue for the United Kingdom was £4.48 billion for the year, up 2.8% compared to £4.36 billion the previous year.

In the UPC Holding group there were continuing losses of basic cable television customers, apart from the Czech Republic, and overall gains of 53,200 enhanced video customers in the last quarter of 2016. The greatest gains were in Poland, up 14,600 video customers. Hungary increased by 12,900. Switzerland gained 12,700. Romania added 10,800.

In the Netherlands, Ziggo is now a 50:50 joint venture with Vodafone, as of the end of 2016, so now falls outside the aggregated Liberty Global numbers. VodafoneZiggo ended the year with 3.34 million enhanced video customers, up slightly on 3.32 million the year before, while total video customers fell from 4.09 million to 3.98 million. Of these, the number with the next-generation Horizon TV box increased by 77,000 to 1.1 million, or just over a quarter of the total base.

Liberty Global is increasingly distinguishing its European operations from those in the Americas. The so-called LiLAC group, in Latin America and the Caribbean, saw modest losses across video, internet and telephony customers.