The BBC is going to require all users to sign in to the BBC iPlayer, BBC iPlayer Radio and some of its mobile apps. Users will have to provide an email address, password, postcode, and optionally a date of birth. The BBC executive who sponsored the ‘myBBC’ project coincidentally resigned days after the announcement.

The BBC has been promoting user registration for some time. Certain features of BBC iPlayer are only available to users that register. Over seven million people have so far opted to register to sign in for a BBC ID, but this will become compulsory for some services from early 2017.

“I want everyone to get the very best from the BBC,” the BBC director general Tony Hall said in a statement. “By learning about what you want and like we can take you to more of the great programmes you love, stories you might be interested in and content you might otherwise never have discovered.

“This is a real transformation — reinventing public service broadcasting for the digital age. Millions of people are already benefitting from this more personalised BBC, and by rolling it out for everyone no one will be left behind.”

Some might suggest that the very basis of public service broadcasting is that it is available to anyone that can receive the service, without having to sign in or subscribe, or have their usage behaviour tracked.

On the other hand, signing in allows personalisation, recommendations and promotions to be individually targeted, which may result in an improved user experience.

Of course, it is possible to provide personalisation without need an email address, password and postcode, as is currently required to register for BBC services. It is also unclear how this will work with services on shared screens. There are also accessibility issues to consider, as well as concerns about privacy and the security of data. 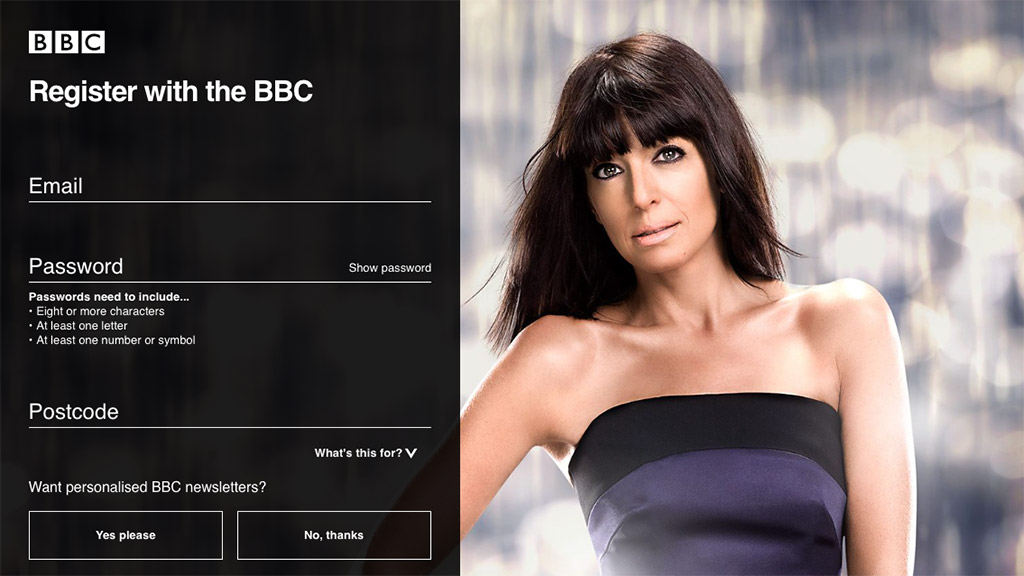 Since the start of September 2016, anyone watching BBC programmes online needs to be covered by a valid television licence.

“Coming less than a month after the extension of the licence fee to the iPlayer, it’s hard not to see this as just a way of encouraging people to pay up,” conceded David Sillito, the media correspondent for the BBC. “The inclusion of a postcode as part of the new compulsory sign-up information certainly suggests it could be a way of alerting TV Licensing to homes that currently don’t have a licence but are watching the iPlayer.”

The BBC says that its TV Licensing division “has access to the information” but says it “won’t be used for enforcement” although adding that “it may be in the future”.

In a revised privacy policy, the BBC says it will only collect data needed to give audiences a better experience, improve its services and fulfil its responsibilities as a public service. It says it will never sell personal details to anyone and only use data commercially when people are using commercial BBC services, like BBC store. Users will be able to manage or delete their BBC account at any time.

“Some of you might be thinking that this is driven by the changes to the so-called ‘iPlayer loophole’ which means you now need a TV licence to download or watch BBC programmes on demand on iPlayer,” wrote Helen Boaden, the director of BBC Radio and the ‘executive sponsor’ for the myBBC project. “It’s not — it’s about giving you a better BBC.”

Two days later she announced her resignation, after a 34-year career in BBC journalism and management.

She will be succeeded by James Purnell, who was briefly culture minister and went on to become director of strategy and digital at the BBC and although he has no programme making experience is being seen as a contender for the top job running the BBC.

In a parting speech, Helen Boaden said: “All institutions must evolve, but their values need to remain constant. More than that: they need to be aware that their values can shift imperceptibly, taking their cue unconsciously from the wider media or swept along by the technology at their command.”

Her speech reflected on the risks of immediacy in news coverage in the digital world, ending with the words: “The future, as always, is in our hands and the public will judge us by what we do.”