The London 2012 Olympics is remarkable for its television coverage in many ways, not least the use of an ultra-high-definition system called Super Hi-Vision, developed by the Japanese national broadcaster NHK and demonstrated in conjunction with the BBC. Promoted as the future of television, it has sixteen times the resolution of a high-definition image. Seen by informitv on an 8-metre wide screen at BBC Broadcasting House in London, the picture quality is phenomenal.

At 7680 x 4320 pixels, the 8K UHDTV2 image has a resolution of 33 megapixels. The projected result is rather like looking through a window direct to the venue, supported by an immersive 22.2 channel surround sound system. 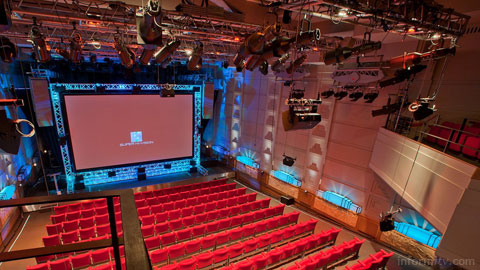 The coverage of the opening ceremony put the audience in the best seats in the stadium and allowed them to survey the scene, taking in every detail. Whereas television traditionally cuts from shot to shot in order to provide continuous visual novelty, the wide static shots enabled the viewer to explore the image as if they were actually present. This was partly because of the limited number of camera positions, but also suited the aesthetic of the big screen presentation.

Coverage of events also gave the impression of being sat in the stands, providing a powerful feeling of telepresence, to which the cacophony of cheering spectators all around also contributed. Rather than the banter of commentators, the booming announcers at the venue provided sufficient context.

The images seemed to work best when left to themselves, without the distraction of superimposed graphics, with the screens at the venue providing the relevant information. This suggests that such theatrical presentation requires a different visual grammar that requires more work from the viewer but is more rewarding as a result, allowing them to feel more involved in the event.

No doubt there will also be calls for stereoscopic ultra-high-definition, but that may be an unnecessary distraction. The three-dimensional sound, however, was truly immersive. Matching that sound stage to the pictures, however, presents problems when changing the visual viewpoint.

As a proof of concept, the Super Hi-Vision coverage appears to have been a spectacular success, much appreciated by those fortunate enough to see it. It will also prove to be an important historical record of the London 2012 event.

In 1948, when the Olympics was last held in London, there was extensive television coverage but less than a minute of it remains today, in a rare recording of the opening ceremony. This time the saturation coverage is likely to be preserved for posterity, but it may be these Super Hi-Vision images that provide the best record for future generations.

The only three operational SHV cameras in the world have been in use at the Olympic Park in London, linked to a dedicated outside broadcast truck. From there the uncompressed pictures are fed via diverse fibre optic links at 24Gbps.

The images have been edited using a high-definition proxy that is used to create an edit decision list to drive the editing of the high-resolution material.

Edited packages are played out from solid-state systems and encoded at a total rate of around 350Mbps over a data network to screens in London, Bradford and Glasgow, as well as theatres in the United States and Japan.

These trials demonstrate that IP networks are capable of reliably carrying high bit rate audio and video. So, for those wondering why we will ever need gigabit connections to the home, ultra-high definition television may be one answer.

There will be those that suggest that such resolution is unnecessary for the size of screen that will generally be available in the home. Yet an A2 photographic print has approximately the same resolution, suggesting that screen displays of such definition are not only desirable but ultimately inevitable. After all, the Nikon D800, a consumer still camera, already packs more pixels with its 36 megapixel sensor.

In the meantime, 4K resolution screens, four times that of high-definition and a quarter of ultra-high-definition, are already a practical reality. Delivering such images by satellite is already eminently practical. By the time of the next Olympics we can expect such images to be distributed direct to the home, albeit to a limited audience.