Broadcasters will need to adapt to the online world if they are to remain relevant. Senior executives from Adobe, Cisco, Google, IBM and Microsoft took part in a conference session at IBC, produced and chaired by informitv. Their main message was that online video is evolving rapidly and while broadcasters will retain an important role, they need to embrace internet protocol distribution or risk being left behind. 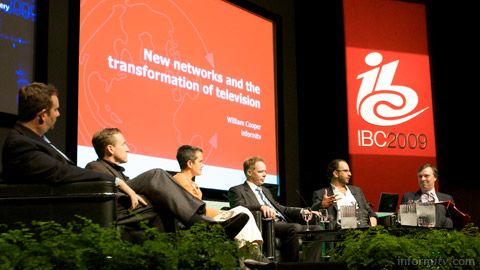 Ken Morse, chief technology officer for video at Cisco, said that there were “barbarians at the gate… bearing gifts,” which nicely captures the combination of threat and opportunity, although broadcasters should perhaps beware geeks bearing gifts. By 2013, Cisco forecasts that 90% of consumer internet traffic will be video, and video will account for half of total internet traffic.

Ted Malone, responsible for product management in the television, video and music platform business at Microsoft, spoke about the Mediaroom platform, now deployed to around 4 million subscribers worldwide. He observed that despite the growing interest in online video, the vast majority of viewing was still of traditional television services.

Jen Taylor, director of Flash content creation and distribution at Adobe, said it was about the future of storytelling and engaging audiences. She said that delivering video in the digital age was about integrating workflow, delivering quality, discovering content, monetizing media, measuring performance, and engaging audiences. Adobe Flash is not only available on most personal computers, but also on nearly half a billion mobile handsets, and through the Open Screen project it could also be coming to television set-top boxes and displays.

Rob van den Dam of the IBM Institute for Business Value talked about the “changing face of communications”. He said that media has become a mass of communications, with social media redefining what broadcasting really means. The media market was moving from the gated communities controlled by traditional communications providers to the shared social spaces of the open internet. He warned that the option of doing nothing about this is a luxury that few broadcasters can afford. The combination of an old media mindset with a new media consumer would result in disintermediation and “the end of control”.

Patrick Walker of Google, responsible for partnerships with YouTube across Europe, observed that the video sharing site now has more than 350 million users a month and that around 20 hours of new material is uploaded every minute. He emphasised that it was not all skateboarding dogs.

Asked what he would do if he were in charge of a television network, he said: “I would have my own online service to draw people in, but there are others with greater reach that can draw an audience”.

YouTube is slowly building a better relationship with broadcasters. It is now possible for multiple owners to claim rights by geography, with the option to remove material, or share advertising revenue on redistribution in that region.

As video moves online, will there still be a role for broadcasters? “They have a very important role to play,” said the YouTube executive, “as long as they move with the trends”. But he suggested the technology of transmission will ultimately change.

“What it means to be a broadcaster is changing,” added the Adobe representative. “It’s about embracing and extending.”

As far as Cisco is concerned, “everything is going IP”. Broadcasters will have to change because the pace of innovation in online video is such that if they stay as they are they will have trouble keeping up.

Ted Malone of Microsoft suggested that the value of the broadcaster would be in their brands and that the transmission mechanism is secondary and internet protocol is just another distribution mechanism. “IP is just a pipe. Satellite is just a pipe,” he said, but warned: “You can’t treat everyone the same and shove stuff down a pipe at them.” Broadcasters, he said, need to plan to integrate internet protocol services into their network because consumers are starting to demand connected experiences and “the operator that doesn’t offer some sort of connected solution is going to be left behind.”

The New networks and the transformation of television conference session at IBC in Amsterdam was hosted by William Cooper of informitv.