Ten years ago a Norwegian teenager helped to break the copy protection on DVDs. He went on to come up with a way of stripping digital rights management from iTunes music files. Now his doubleTwist startup aims to simplify the synchronisation of media between different devices. An advertisement for the software appeared in front of an Apple store in San Francisco, proclaiming “The cure for iPhone Envy” and promising to open up an individual iTunes library to any supported device.

The advertisement at the subway station next to the Apple store did not stay up for long, but attracted a certain amount of attention in any case. 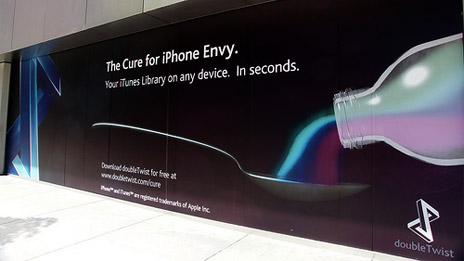 The company aims to create a unifying media platform that connects consumers with all their media and all their devices, regardless of whether they are online or offline. The company says it should not be necessary to use proprietary software to synchronise media to devices from different manufacturers. 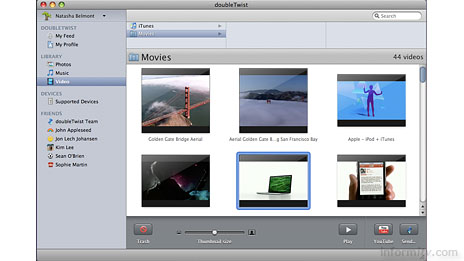 The doubleTwist software is available for Windows and Mac computers and supports media browsing of most major audio and video formats, allowing material to be transcoded and synchronised to a variety of supported media players, including BlackBerry, PSP, iPod, iPhone, and certain Motorola, Nokia, Sony Ericsson and Windows Mobile phones.

The doubleTwist application also allows media to be shared with other users, adding a social dimension. Although intended for personal media, such as photos, it could be provocative to rights holders. However, the doubleTwist software does not itself attempt to circumvent any copy protection or digital rights management associated with media files.

The software is still in development and has some limitations. Superficially it looks a little like the Apple iTunes application. It appears that iTunes needs to be installed in order to synchronise with Apple devices. For users of other devices or with many different media players, doubleTwist could simplify the process of sideloading material for use on the move.