The BBC has unveiled the latest version of its iPlayer online media service which now includes radio and television in a single interface. The size of the video window has also been increased by more than 50% and the audio quality of radio programmes has also been improved. Now the BBC is exploring new ways to bring the iPlayer to the television screen.

Exactly a year after its original launch, the BBC has released a further update of its iPlayer. The new look now integrates with the house style of the new BBC home page and offers much improved navigation and a better user experience overall. 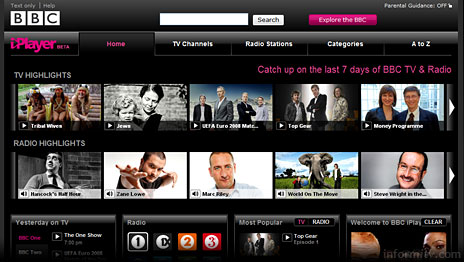 “Audiences are now able to experience the full range of BBC content — some 250 TV programmes currently available each week as well as all the BBC radio networks — in a new and more accessible way, and all for free,” said Erik Huggers, the group controller for future media and technology at the BBC.

“Combining TV and radio in the same interface was a much-debated design decision,” according to Anthony Rose of the BBC. “One of the attractions of the current iPlayer site is that it’s brilliantly simple, and we don’t want to lose that simplicity. However, we felt that if we could provide a way to let you find your favourite TV and radio programmes in one place that would be a major win.”

The BBC also allows users to listen to radio programmes from the last seven days at higher audio quality, or listen live to any of the networks within the iPlayer.

Users can also resume viewing or listening to programmes from the point at which they left off, and they can seek backwards and forwards through radio programmes in the same way as television programmes.

The size of the video window has been increased from 512×288 pixels to 640×360 pixels, which Anthony Rose described as a 25% increase. In fact it is more than a 50% increase in spatial resolution.

As a result the video is much more watchable, although it is evidently slightly over compressed to keep the data rate down. Nevertheless it represents a major improvement in streaming quality.

Future plans include greater personalisation, allowing users to tune the iPlayer to their own individual interests.

Rather more controversially, the BBC is also talking to hardware manufacturers about set-top box solutions that could bring the iPlayer directly to the television screen.

The iPlayer brand is already used to provide catch-up programming through the video-on-demand services of cable operator Virgin Media and is accessible through the Wii games platform but as yet is unavailable on devices such as the Apple TV.

“There are many things out there in the market but what we haven’t got is a simple standard,” the BBC director general Mark Thompson told the Financial Times. He said the corporation was “looking very hard” at forming an alliance to introduce a simple standard.

In May there were 21.8 million requests to view programmes through the iPlayer, an average of some 700,000 per day. That number seems likely to continue to rise as a result of these further improvements in the service.

The iPlayer is more than a feature of the BBC web site. It is rapidly becoming a platform in its own right.