The Adobe Media Player has been formally launched after an extended period of development and testing, having been first announced at the NAB Show exactly a year ago. Adobe has announced partnerships with broadcasters including CBS, PBS and MTV. Noticeable by their absence are ABC and NBC, the latter having launched its own platform under the Hulu brand. Nevertheless, Adobe Media Player offers a number of benefits to users.

The cross-platform player works on both Microsoft Windows and Apple OS X, and will soon be supported on Linux. It allows video to be viewed both online and offline, addressing a limitation of online services that only support streaming while connected to the internet, and providing better usability than many other proprietary download managers. 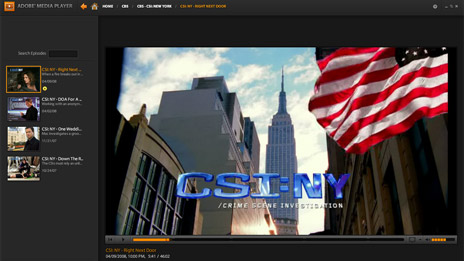 “With Adobe Media Player, we’re bringing viewers and content owners closer together, with an experience that doesn’t constrain them by platform or proprietary software application,” said John Loiacono of Adobe. “It’s a merger of TV Guide and DVR for internet video content.”

Adobe Media Player provides high-quality playback of streamed, downloaded or locally stored video in the Adobe Flash format at resolutions up to 720p or 1080p, taking advantage of support for the MPEG-4 H.264 video compression standard.

Users can also subscribe to channels and then automatically receive new episodes of shows as they become available using RSS feeds.

“CBS Interactive’s new player sets the standard in high-resolution viewing for the web,” said Anthony Soohoo, who is responsible for entertainment and social media at CBS Interactive. “Our expertise in creating content and building immersive user experiences combined with Adobe’s platform offers our users the most entertaining way to discover and participate with premium CBS content online.”

“Across our brands, we program an incredibly diverse content offering, and it’s important that we reach out to our wide and varied audiences not only through our own channels and websites, but everywhere they consume entertainment,” said Greg Clayman, in charge of digital distribution and business development at MTV Networks. “By launching our content on Adobe’s new, cross-platform player, we’re extending our reach even further, through one of the most interactive and user-friendly video players available today.”

The Adobe Media Player or AMP requires the user to download and install the application and only supports video in Flash compatible formats. As a result it is unlikely to become a universal media player in its current form, but offers programme providers and publishers a simple but powerful platform that does not require them to implement their own player.

Adobe Media Player is immediately available as a free download for Windows and Macintosh platforms from the Adobe web site.