Millicent provides an Apple Mac based software platform for brands and broadcasters to create television broadcasts using material sourced from the web or mobile phones. Created by London company Best Before Media, the technology has already been used by the BBC for its live, daily One Show.

Millicent brings the power of broadcast graphics systems to the diversity of online and user-contributed content from the web and mobile phones. It allows existing broadcasters to use such material more efficiently, while also providing a new generation of producers with the tools necessary to start their own channels, promising to provide a television studio in a box. 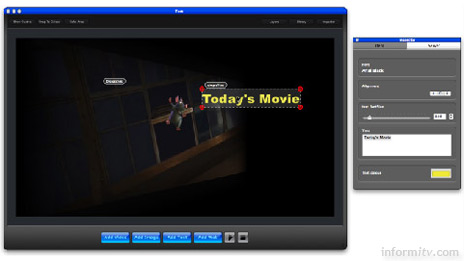 The toolset includes the M.Ccreate tool for designers which creates motion graphics templates, M.Control, a web based content management system, and M.Player which plays out a broadcast video feed.

M.Create is an OSX application that allows interactive screens to be designed using simple drag and drop techniques. Material from web feeds or mobile phones can be used as elements and have various effects applied. Artwork can be easily imported from Adobe Photoshop or Illustrator files and particle effects can be used to generate motion backgrounds.

M.Control allows moderation of user contributed material and control over broadcast schedules. It can import text from RSS feeds, photos from Flickr or videos from YouTube.

M.Player takes the screens designed in M.Create and content chosen in M.Control and plays out the result as live video. Using a high-end Apple Mac with a suitable graphics card, it can deliver a broadcast quality serial digital signal, together with an alpha channel key.