Satellite television operator BSkyB is formally launching its Sky by Broadband movie and sports video download service, with a version for the Microsoft Media Center announced by none other than Bill Gates.

The Sky by Broadband service is based on peer-to-peer distribution technology from Kontiki. The same system is employed by the BBC iMP integrated media player project, currently the subject of an extended public trial.

Developed by ioko, the Sky broadband application certainly seems to have learned from the BBC project. It presents an impressively intuitive user interface that allows users to select, download and play full-length feature films and sports highlight clips. 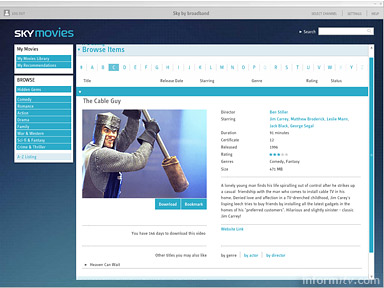 The Sky by Broadband service is available free to subscribers of the Sky premium movie or sports channels by signing up online.

A version for the Microsoft Media Center will also be available. Microsoft chairman Bill Gates announced a partnership with the satellite broadcaster in his keynote speech at the Consumer Electronics Show in Las Vegas.